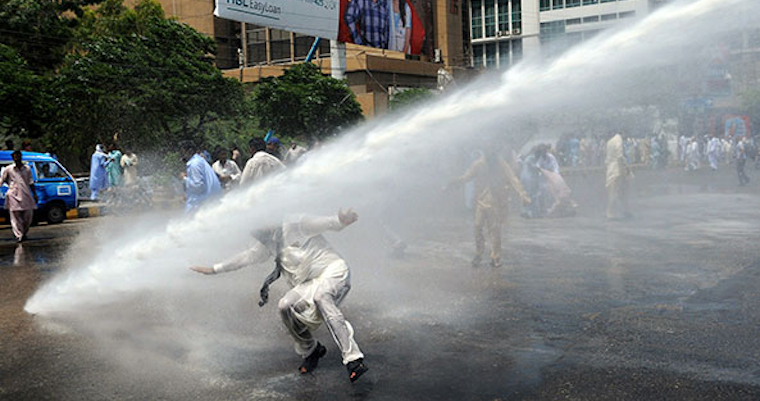 Yesterday we showed you a bunch of South Londoners annihilating a couple of cops in a snowball fight. Today, this is what happens when the civil servants fight back with a huge water cannon.

Yesterday we showed you a pretty awesome video of a gang of South Londoners completely annihilating a couple of coppers in a snowball fight, but now it’s time to check out the other side of the coin. This video was uploaded a couple of days ago and is pretty classic. I think it takes place in Nottingham although I’m not 100% sure – it just kinda looks like this area of Nottingham I know but I could be completely wrong because I haven’t been there in years, but I’m gonna stick my neck on the line and say it’s Nottingham for now – and it’s a real cool video.

Basically, like yesterday some kids think it would be really funny to throw snowballs at some people that are actually paid to help them out. In fairness I though it was pretty awesome in the video yesterday because I generally don’t like cops – they are always getting in my face and most of them are assholes – but I think there wasn’t really any reason to throw snowballs at these guys because they’re just hanging out on the river trying to fix the bridge or whatever. This is actually a useful activity that benefits the community rather than the activity of most cops which includes but is not limited to: not believing me when I tell them that my phone got stolen; accusing me of drink driving when I wasn’t and being real assholes about it and giving me a £60 fine for pissing down an alleyway. Real useful guys.

Read This Next: Snow Survivor

So yeah, these guys on the river are OK in my book and don’t really deserve to get pelted by snowballs by some little kids. Which is probably why they decide to get their own back on them massively by firing a huge water cannon at them. Way to mess with the wrong guys idiots. I don’t really understand the reaction of the kids on the bridge though because they seem to just stand there and let themselves get pelted with water even though it’s snowing and that would obviously be really freezing and annoying. I mean I’m not gonna lie, I really like getting wet but I think if it’s the middle of winter and it’s freakin’ snowing then I do not want to be getting wet because it will just freeze my butt off and be a generally crappy experience. So yeah, can’t really understand why he just takes it and doesn’t leg it off or anything, but it makes the video a bit funnier.

Check it out below, and maybe make sure that the guys you’re throwing snowballs at don’t have a giant water cannon next time you decide to pick on someone: