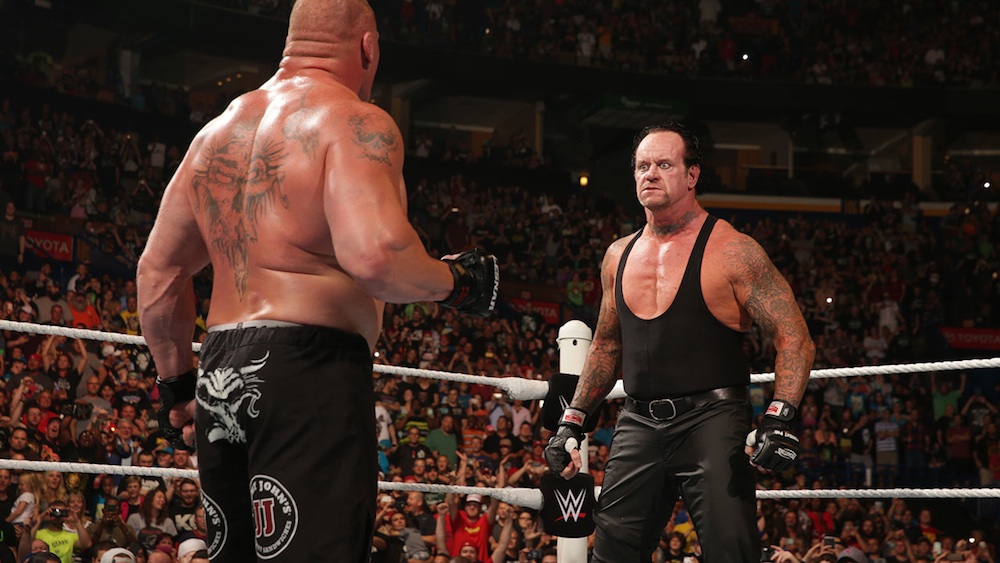 The Undertaker returned out of nowhere last night to get revenge on the man who MURDERED his undefeated streak.

A year ago everyone who had ever watched wrestling absolutely hated it when the Undertaker lost to Brock Lesnar clean at Wrestlemania, causing his legendary undefeated streak at the event to end.

Even though the Undertaker hasn’t been looking too good in recent days and wrestled at this year’s Wrestlemania without incident, it seems like he still harbours a grudge against Lesnar for ending his streak – and who can blame him? – and he picked last night at WWE Battleground to make his return and get a his revenge. The Undertaker interfered in Lesnar’s match with champion Seth Rollins when it looked like Lesnar had him beat and was going to regain the world title. Unfortunately though, the lights went out and the Undertaker’s bell rang and then he appeared in the ring before chokeslamming and Tombstoning Lesnar and leaving his championship dreams in the dust.

The most shocking part about it all though is how scared Lesnar looked of Undertaker when he appeared in the ring – surely he can’t be that terrified of a guy he beat the absolute crap out of a year ago in a very one sided match and is even older, fatter and slower than he was then now? I know it’s wrestling so it’s not supposed to be realistic, but they could have at least tried to do something that made sense for once? I suppose we’ll get Lesnar V Undertaker part 2 at Summerslam this year, but considering how Brock is a an absolute beast now I can’t see the Undertaker pulling it out of the bag one last time and beating him. I guess we’ll have to wait and see how it pans out though.

Check out these pictures from Undertaker and Mankind’s epic hell in a cell match from 1998 to remind yourself of what he was capable of once.