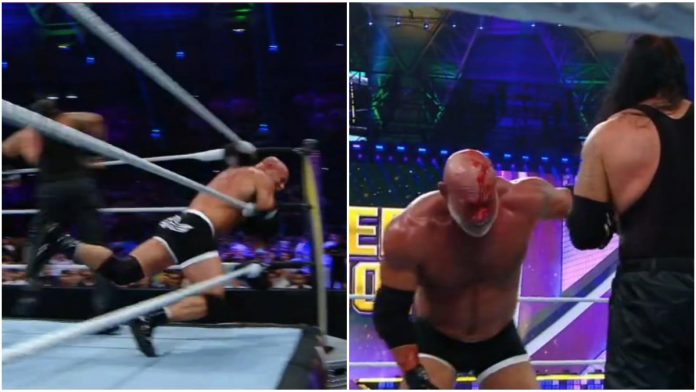 What an absolute disaster.

54-year-old Undertaker and 52-year-old Goldberg “finally” fought at WWE Super Showdown In Saudi Arabia this weekend, and it went about as well as anybody with a brain thought it would.

Watching these clips where they can barely lift each other up and nearly break each other’s necks, it’s probably best that Taker and Goldberg never step foot in a wrestling ring ever again:

That Undertaker vs Goldberg match is a pretty decent example of why the Tombstone was banned #WWESSD #SuperShowDown pic.twitter.com/mf7SvAsJzI

Undertaker’s face after the match says it all:

The match only happened because the Saudi billionaire who organised the show grew up a huge wrestling fan and wanted to see some of the legends from his youth.

Goldberg apologised for his performance after the fight, claiming he got knocked out:

Knocked myself out and thought I could finish…. love my fans…..but let u down. Everyone else that found “pleasure” ….. hope ur happy

In this old, resurfaced interview, Undertaker claims he never wants to be in the ring past his prime. Take your own advice Taker!

Undertaker needs to watch this & take his own advice… #WWE #WWESSD

Another person who is lucky to have escaped Saudi Arabia alive is Finn Balor, for posting a photo of himself wearing a Pride shirt and celebrating Pride month in the notoriously homophobic country. Pretty sure they behead you for this sort of thing: