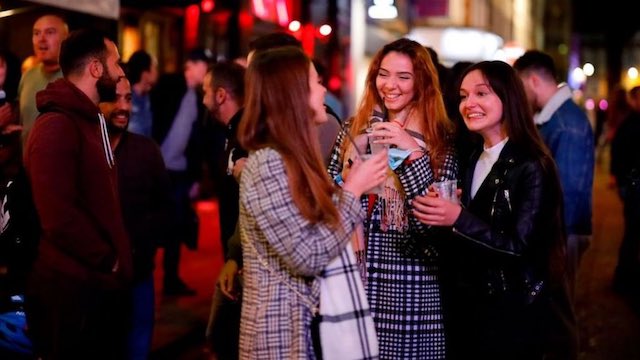 How is this going to help anything?

There’s understandably been a huge outrage following the murder of Sarah Everard – allegedly committed by off duty Met policeman Wayne Couzens last week – and a subsequent culture war on Twitter between women sharing all the times that men had harassed/assaulted them and a bunch of other men rallying behind the #NotAllMen and saying it wasn’t all of them. Just a standard day in the UK these days sadly.

Anyway, I’m fairly certain that nobody who was caught in this debate thought that the answer to stopping women being accosted by sexual predators in bars and clubs was to employ undercover/plain clothes policemen to patrol them, but the government has announced today that this is the idea that they’ve come up with in order to try and combat it. Codenamed ‘Project Vigilant’, the scheme will also see an increased police presence on the streets around the closing time of clubs/bars, as well as an increased education focussing on ‘identifying predatory and suspicious offenders’ within these patrols There would also be a doubling of the Safer Streets Fund to £45 million that will improve lighting and CCTV cameras on routes home.

Whilst I’ll concede that having more police on the streets MIGHT help the situation and that better lighting and CCTV definitely will, I can’t really say that I think having undercover police officers in bars and clubs is going to do anything but start loads of fights and unnecessary arrests and not really make anyone feel any safer. You already see people scrapping every other weekend about nothing when they’re drunk, can you imagine how much worse that’s going to be when someone says they’re an undercover cop and tries to stop someone from talking to a woman? So many problems can arise from a situation like that and I can’t see any of them helping.

The vibe on Twitter was similar to my feelings with many people choosing to post their dissatisfaction with the idea in the forms of memes. Obviously the fact that Wayne Couzens was an off duty policeman when he murdered Sarah Everard – possibly coercing her into his car with his police credentials – played massively on this:

Who will protect the women from the plain-clothes police officers https://t.co/MEyL2y5REA

“I’m actually a plain clothes police officer here to protect you, haha yeah I guess I am one of the good guys” pic.twitter.com/ho1zPDFu8A

“I’m actually a plain clothes police officer here to protect you, haha yeah I guess I am one of the good guys” pic.twitter.com/ho1zPDFu8A

Not sure the best way to rebuild trust following an arrest of a police officer for murder is to shove the squad in plain clothes and allow them to stalk drunk women at night https://t.co/f6KsPdkk6m

Hey do you remember when plain clothes police infiltrated rights movements and tricked women into having sexual relationships with them & then abandoned them & their child? https://t.co/VbSLY0RA9D

I would honestly rather have a uniformed officer in pubs, rather than a secret one?! Maybe that could deter other men from being creepy at least. A plain clothes officer will do nothing but add to the number of men in that room that I don’t trust.

Genuine question even removing the whole “dont trust the police” issue… How does this help anyone? A cop in uniform might at least be a deterrent. Are they relying on the 1 in a 1000 chance the plain clothes officer might witness something?

The police are now going to wear plain clothes to keep women safe, wasn’t it a copper in plain clothes who murdered the young lady?

A lot of good points there and I guess the idea of it is to deter people from doing anything as they won’t know who a plain clothes policeman/woman might be, but it seems highly unlikely you’re ever going to run into one considering how big the police force is and how many clubs/bars there are out there, so ultimately it just seems completely useless. Added to the fact that essentially a plain clothes policeman almost certainly just murdered a woman and it’s another completely tone deaf solution from the current government.

Having said that, women have been talking about sexual assault and everything they have to put up with from awful men for years and it doesn’t seem like it’s stopped anything, so I’m not sure what the solution is. You would like to think that increased education about these matters might do something but it seems to be ignored for the most part and in the worst cases actively challenged, so I’m just not sure what the solution is. Anyone with any ideas, feel free to share.

For more of the same, check out this woman who tried to trade sex for nachos with an undercover policeman. Still not a useful situation for them to be in.