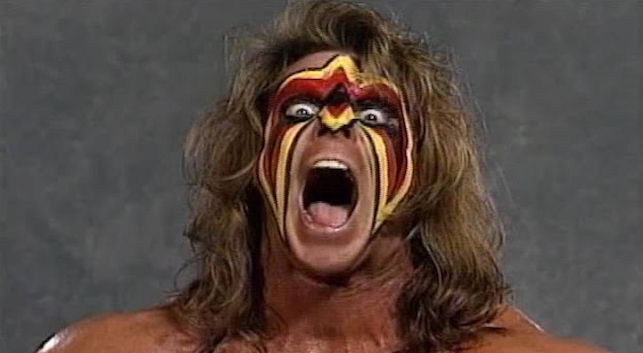 Sad news greeted us upon waking up this morning with the announcement that the Ultimate Warrior had passed away. Here’s our tribute to him.

Terrible news to wake up to today as it was announced late last night that the Ultimate Warrior – real name James Brian Hellwig – has died at the age of 54. This is made even sadder and more surprising by the fact that he was only inducted into the WWE Hall Of Fame on Sunday, and also appeared on WWE Raw on Monday night to address the fans.

The WWE released the following statement regarding his death: ‘WWE is shocked and deeply saddened to learn of the passing of one of the most iconic WWE Superstars ever, The Ultimate Warrior. Warrior began his WWE career in 1987 and quickly went on to become one of the biggest stars in WWE history. Warrior became WWE Champion at WrestleMania VI, defeating Hulk Hogan in an epic encounter. We are grateful that just days ago, Warrior had the opportunity to take his rightful place in the WWE Hall of Fame and was also able to appear at WrestleMania 30 and Monday Night Raw to address his legions of fans. WWE sends its sincere condolences to Warrior’s family, friends and fans. Warrior was 54 and is survived by his wife Dana and his two daughters.’

No details have been released of the exact circumstances surrounding his death and given the timing of it and the general bizarre nature of wrestler’s lives there is a lot of speculation flying around about whether he may have taken his own life or not. It’s important to remember that until more information is released that this is just speculation.

What isn’t speculation though is that the Ultimate Warrior is one of the WWE (WWF)’s all time greats. Here’s a bunch of videos, pictures and GIFs celebrating the great man (including his legendary defeat of Hulk Hogan at Wrestlemania VI) and let’s hope that he’s giving Jesus a Warrior Splash in the sky right now.

Check out some Ultimate Warrior GIFs on the next page: