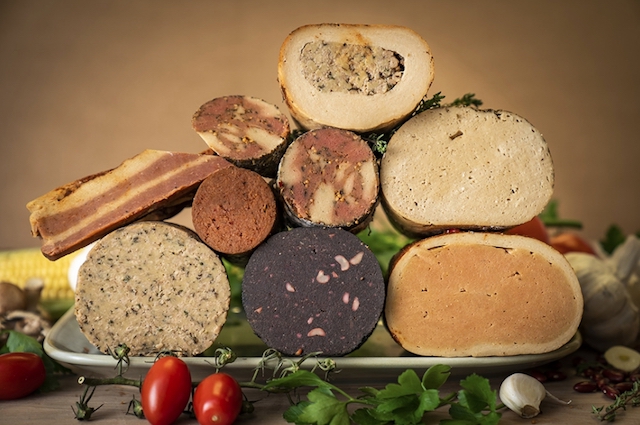 There’s no denying that the vegan scene has really taken off in the last few years and now it’s time for another major milestone in the UK’s vegan journey with the opening of the first ever permanent vegan butcher in London on World Vegan Day, November 1st. How many times can YOU put vegan in a sentence?

The butcher is the brainchild of the famous Rudy’s Vegan Diner in Camden and will be called Rudy’s Vegan Butcher (original), setting up shop on Upper Street in nearby Islington. Here’s the Instagram post that reveals all the details about it what you can expect from it:

📣 THE COUNTOWN IS ON: RUDY’S VEGAN BUTCHER OPENS ITS DOORS IN ISLINGTON ON 1 NOV📣 🥓🥓 In just two weeks on World Vegan Day, Rudy’s Vegan Diner is bringing the first permanent vegan BUTCHER to London town 😱 We will be giving away 💯 pounds of FREE baycon to celebrate. That’s more than 5000 slices! Each customer gets a half pound each until it lasts so🏃‍♂️🏃‍♀️ 🥓🥓 Imagine stocking your fridge with Chef @matthew.j.foster’s homemade pastrami, dirty burger patties, cheeze sauce & chilli-non-carne. Take them home with you & get creative in the kitchen! You can even recreate your own Rudy’s specials and fill your basket with a rack of jack, lobstah salad, meatballs, chick’n lover pate, shredded BBQ pulled porc and even roast turk’y! LOOK 👀 ➡️ 🥓🥓 Oh WAIT, keep reading. There’s more exciting news 👏 🥓🥓 If you can’t make it to London, don’t worry! You can order Rudy’s Vegan Butcher goodies ONLINE & we deliver nationwide 🇬🇧 All online orders made on World Vegan Day include a FREE pack of baycon. Remember to pile your online basket high with homemade scramble v-egg, soysage patties & bloody delicious black puddin’ to go with that free baycon. 🥓🥓 Looking for something new? Try out our new charcuterie selection: smoked ham, salami de provence, pepperoni, oh and of course that pastrami y’all keep talking about! Oh, what to do with it all 🤔 🥓🥓 That’s all happening in just TWO weeks on 1 November. Stop by our new vegan butcher on Upper St in Islington or order online and check it out. Who can say no to FREE baycon?

Yeah, sounds like it’s going to be worth checking out, even if you’re a die hard meat eater because their fake meat stuff is usually pretty good and you can’t even really notice that it’s not genuine meat half the time. My only worry would be that it’s overpriced, as a lot of vegan produce usually is and especially in what looks like it’s going to be a posh butcher shop in a posh part of town in Islington, but hopefully they’ll get the price points right.

Obviously this even happening is also going to infuriate a large portion of the population too because you know, vegans taking away the rights of meat eaters etc, but in reality veganism isn’t going anywhere so you might as well get used to it because it’s only going to get bigger. It’s not going to affect your meat consumption in the slightest – unless maybe if you live to be 150 years old or similar – so let them get on with it and chow down on your baby back ribs or whatever. It’s cool.

For more of the same, check out this story about a vegan who went back to meat after the diet left her body breaking down. Guess it’s not for everyone.