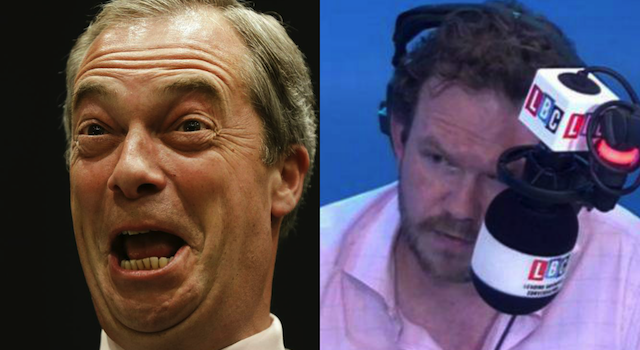 Unless you’ve you’ve been living under a rock for the past few years it’s pretty hard not to know who UKIP and their private-schooled-ex-banker-in-London-come-man-of-the-people Nigel Farage are. We here at Sick Chirpse have known they were a danger for a long time. For those of you who don’t know they’re basically the BNP in tweed blazers or what the Tories would be if they weren’t so closeted about their racism.

James O’Brien was holding a phone on LBC radio to see what people thought UKIP actually stood for. The first call was a man called Jack from Welling, this clip shows what he had to say.

listen to ‘What Do Ukip Stand For? James O'Brien's Takedown Of This Supporter Is Effortless’ on audioBoom

As UKIP love to generalise and so does Jack from Welling, lets all generalise that every UKIP supporter is as misguided and stupid and Jack from Welling and do our best to keep them out of power, we can’t leave it all up to Russell Brand now, can we?