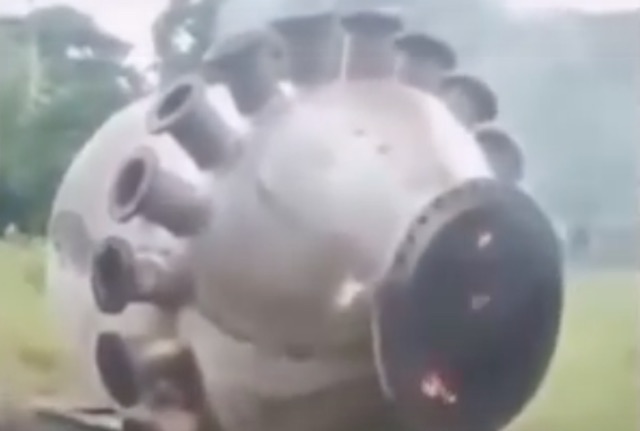 Hold onto your tin foil hats here people, because a UFO expert is claiming that a sill burning spacecraft that fell to Earth in the Dominican Republic is almost certainly alien technology.

The spacecraft came to prominence in a video that was shared earlier this month and it certainly looks weird and strange, although there’s no real evidence that the ‘spacecraft’ in the video has even fallen to Earth other than the word of whoever’s filming it. This isn’t enough to stop UFO expert Scott Waring though, as he’s almost completely sure that it’s alien technology:

Wow, this thing is huge and still burning. Look at that fire in the opening as you watch the video. It’s just amazing that this thing didn’t kill someone when it fell.

Notice the corned [sic] all around it had caught on fire and the people had put it out.

Is this object a man made rocket part? There is a high probability of that, but if its man made, why didn’t NASA or some other agency warn the public in that area of the world?

Because there was no warning…I believe there is a big probability of this being alien technology.

If this was from one of the SpaceX rockets…Elon Musk would have warned people in that area of the world. Elon would not just ignore something that big and dangerous to harm someone. So it can’t be SpaceX.

So…is it a rocket part? If so…which country is responsible for it? If not…then it’s 100% alien technology.

For more of the same, check out this story about when Miley Cyrus thought she saw a UFO. Far out man.