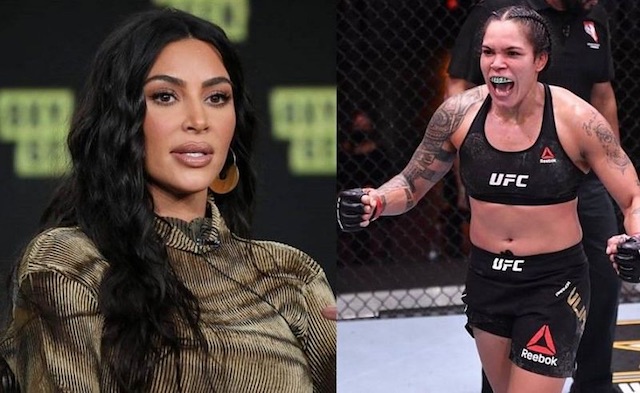 Would you pay to watch this?

We’ve all seen how celebrity boxing matches seem to be the most profitable way for professional fighters to make a quick buck these days, so it’s no surprise that UFC women’s champion Amanda Nunes wants a piece of the action – although her choice of opponent is a bit ridiculous.

In fairness to Nunes, at least the conversation was started when UFC boss Dana White was talking about the Logan Paul Floyd Mayweather boxing match and said the following and it wasn’t actually her original idea:

I got no hate for the kids at all, these kids have figured out a way to parlay their success on YouTube and their popularity into going in and making big money fights. Good for them.’

I say this all the time, there’s always going to be a market for this type of fight. Imagine if Kim Kardashian wanted to fight Amanda Nunes? How big do you think that fight would be?

[…] I see a lot of these fighters cry and say, ‘Oh this guy is making this much money, and that guy’s making that much money.’

What do you think Kim Kardashian would make if she came in and fought Amanda Nunes? Probably more than anyone’s ever made, ever.

That’s probably true and Nunes was quick to get involved, sending out the following tweet to one of the richest women in the world:

Yeah, Kim obviously hasn’t replied to that and probably never will and she’s definitely not getting into the ring any time soon, but just imagine how ridiculous it would be to see those two fight each other. Would literally be over in about five seconds if that. Such a dumb idea but you know loads of suckers would pay for it FFS. That’s the state of boxing right now I guess.

For more of the same, check out Amanda Nunes saying that she’ll fight Jake Paul. Now that’s definitely something I want to see.