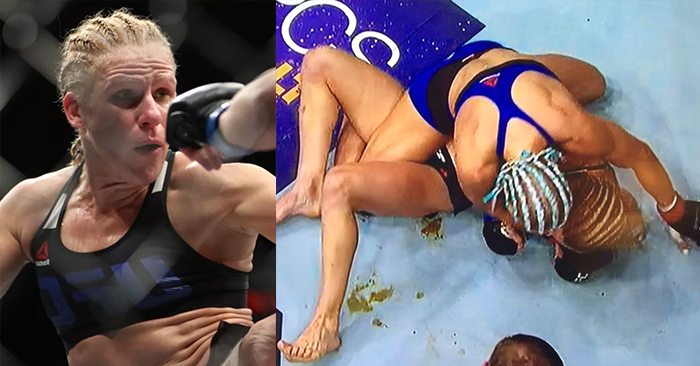 The term “beating the crap out of someone” was taken to a whole new level during the recent UFC Fight Night Oklahoma.

Strawweight fighters Felice Herrig and Justine Kish were in the middle of a round when Herrig got Kish in what looked like a finishing choke hold. However, Kish managed to somehow escape Kerrig’s grip, but not without leaving a little deposit behind:

Grimy. I love how that clueless guy just walks right through it at the end there. Apparently the UFC team did their best to clean up the stains, but they could still be seen for the rest of the night. All in all, it was a pretty bad night for Kish, but in her words – shit happens:

I am a warrior, and I will never quit #ShitHappens haha be back soon.

For the time an MMA fighter sobbed like a baby in the ring after receiving a lethal kick to the dick, click HERE.