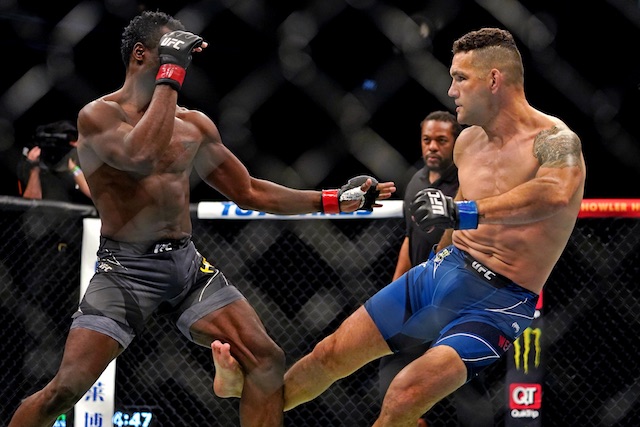 The thing about UFC is that any time anyone steps in that octagon then there’s serious potential for them to suffer a career ending injury and this was illustrated once again over the weekend during the Chris Weidman v Uriah Hall bout at UFC 261.

Weidman experienced one of the most horrific leg breaks in MMA history after literally his first kick of the match was checked by Hall. You can check it out below but be warned it’s particularly gruesome so don’t press play if you’re eating your lunch or anything. Not worth it.

The first fighter in @ufc history to win without a single strike thrown #UFC261 pic.twitter.com/zxyu5XhYu3

Uriah Hall Breaks Weidmans leg in half. First kick. Insane. Chris Weidman is being carried out on a stretcher. #UFC261 pic.twitter.com/X8s3X31xi4

Holy shit. The less casual UFC fans among you there will remember that Weidman himself was actually responsible for breaking UFC legend Anderson Silva’s leg in a similar fashion a few years ago, so you might say that he’s getting what he deserves with this one. Although that’s kind of a weird thing to say because this is MMA and the potential for injury is massive. Just kinda crazy that Weidman would suffer an injury like this exactly like one he inflicted a few years ago.

Needless to say, Weidman left the arena on a stretcher and Hall was immediately declared the winner. Hope his recovery goes well because he’s going to be out for a while with that one. What a doozy.

For more of the same, check out that Anderson Silva leg break from a few years ago. Horrific.