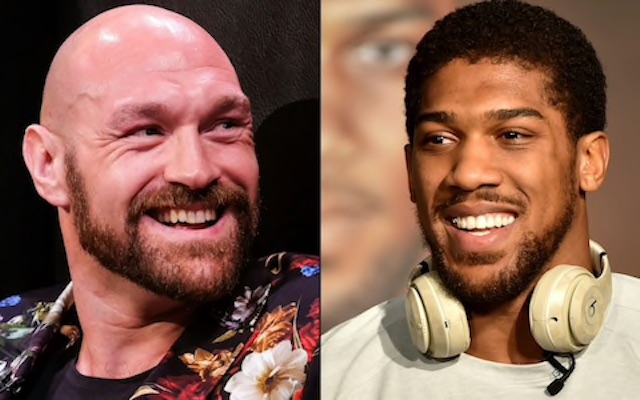 For something like the last five years, the entire boxing world has been building up to a fight between Tyson Fury and Anthony Joshua to finally unify all the world titles and it looks like this is finally going to happen in Saudi Arabia this summer, so obviously the trash talk has already begun.

Fury recently took to his Instagram account to post a video saying that he was so confident that he would beat Joshua within three rounds that he would quit the fight if he didn’t do so. Here’s the video:

While I’m on a rant I might as well call out one more person. A big useless dosser; not a real fighting man, a hype job, bodybuilder, cross fit, big ugly sh*thouse, that’s Anthony Joshua.

AJ, if you’re out there lets make this fight happen you big dosser, you big sh*house bum dosser, I’m going to smash your face in too and there’s not oner thing you can do about it. Prove me wrong sucker, prove me wrong; I’m number one.

I’ve just been thinking… AJ, if you go past three rounds with me I’ll quit in the corner, that’s how confident I am of taking you out in the first two or three rounds. Out, out like a light.

Lol. That’s a pretty funny rinse and almost completely obviously not true either, but you’ve gotta admire Fury for trying to get into Joshua’s head and brining the banter. Back when Conor McGregor was actually a good fighter he used to do similar predictions and a bunch of them actually came true, so there’s a chance this could end up in the same way. Would be a bit of an anticlimax though wouldn’t it?

For more of the same, check out when Tyson Fury bought England fans €1000 worth of Jagerbombs. What a guy.