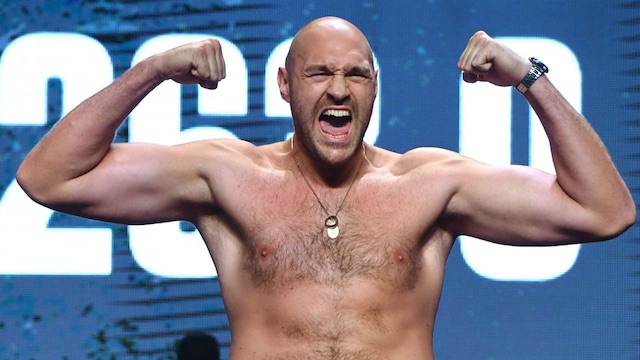 Boxing fans were in a stupor earlier this month after it seemed like Tyson Fury and Anthony Joshua were finally set to face off against one another in a unification bout for all four world titles in a fight that was likely to go down in history.

Now however Deontay Wilder has decided to get involved and say that he requires a rematch with Fury before he fights Joshua and it seems as though the eagerly awaited Joshua Fury fight might actually be off for the time being. Fury has an interesting alternative though as the two decided to engage in a war of words on Twitter last night:

.@Tyson_Fury the world now sees you for the fraud you are.

You lied to the fans and led them on. Used my name for clout not a fight.

Bring me any championship fighter who can handle their business correctly.

@anthonyjoshua your more full of shit that Eddie, Spouting absolute shite! your full team knew there was an Arbitration going on, it was out of my hands! but i tell you what if i’m a fraud let’s fight this weekend bare knuckles till 1 man quits? let’s put up 20 mill each!!! 🖕🏻🖕🏻 https://t.co/NbCvwn6YfN

If there was an arbitration going on, why announce to the world we are fighting! The fight was signed! UNDISPUTED 💥

not going in to the details on line!
you’ll slap me about will you dosser please come and try Bum, i’m waiting… Femi AKA Bottlejob! 24/7 365. Ready. i’ll smoke wilder first then you will get yours aswell. #GK https://t.co/Led1X54PhS

Ooooh. Fighting talk there. I suppose it does seem like the legitimately dislike each other now so that will make it be a bit more exciting when they eventually get in the ring together, but why don’t the just stop farting around on Twitter and actually get it sorted out FFS. Losers.

For more of the same, check out Fury saying he’ll quit the fight if Anthony Joshua lasts longer than three rounds. That’s pretty jokes to be fair.