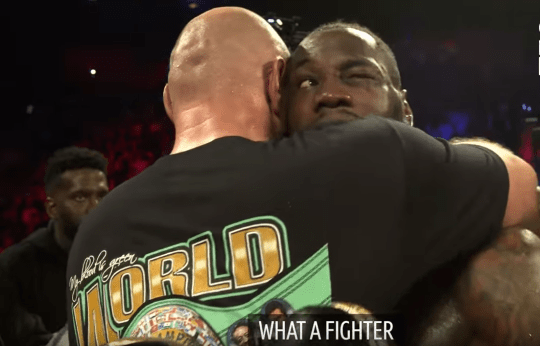 There’s only one Tyson Fury.

After a ton of buildup and a pretty shabby undercard, Tyson Fury and Deontay Wilder finally went head to head last night for the first time since they fought to a frustrating draw in December 2018.

Fury pretty much dominated Wilder for the entire fight, flooring him in the third and fifth round before his team threw in the towel in the seventh while Fury was battering him in the corner.

Ever the gentleman, Fury had some kind words for Wilder after the fight:

Great stuff from a real champion and an absolute legend of the game. If you watch Tyson Fury’s interview on Joe Rogan a year or so back you really get an appreciation of how hard he’s worked to come back from ill health and depression to become the ultimate fighter and showman that he proved he is last night.

In fact Fury provided so much bloggable material last night that it’s hard to keep up. Just look at him warming up before the fight in comparison to Wilder:

We are all just living in it.#WilderFury2pic.twitter.com/Ut7yrEoAZQ

Licking Wilder’s blood as it dripped out of his burst ear drum:

Is Tyson Fury trying to lick the blood off the neck of Deontay Wilder 😂😂😂😂 #WilderFury2 pic.twitter.com/qgIrfPuhfK

Serenading the crowd (and his wife) with American Pie following his victory:

Tyson Fury licked blood off Wilder, praised Jesus Christ and is now singing American Pie. My mind is legitimately blown rn. This is spectacular. This guy is a superstar. pic.twitter.com/Slr1L8gpoK

There’s only one Tyson Fury indeed. What a champ and what a great fight that will hopefully bring boxing back to the one of a kind sport it used to be.

P.S. Turns out Fury’s ‘pussy licking’ training regime worked a treat. Who knew it could be so effective?