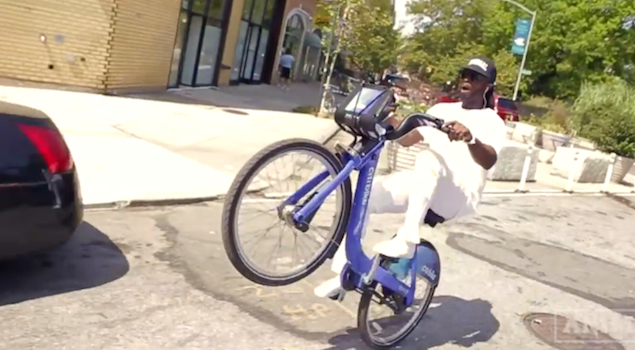 A Citi Bike is the NYC equivalent of a Boris Bike and they’re just as clunky. Daredevil rider Tyrone Williams pushes one to its limits though by taking it on a BMX run.

A Citi Bike is the New York City equivalent of a Boris Bike, and like Boris Bikes they’re big and clunky and completely not suited to BMX style tricks or anything like that. Of course though there’s always one guy who wants to test that, and that guy was Tyrone Williams.

Tyrone Williams is a pretty big deal over in New York City and owns a bike shop there in Williamsburg (that’s the hippest part of NYC right now) called Dah Shop. He’s well known for being a complete sickhead at biking over there so it made perfect sense for Animal to approach him when someone from their team had the idea for kicking the absolute crap out of a Citi Bike by taking it to its limits with a BMX set around NYC.

Tyrone absolutely smashes it in this video, busting out grinds, bunny hops and wheelies all over the place.