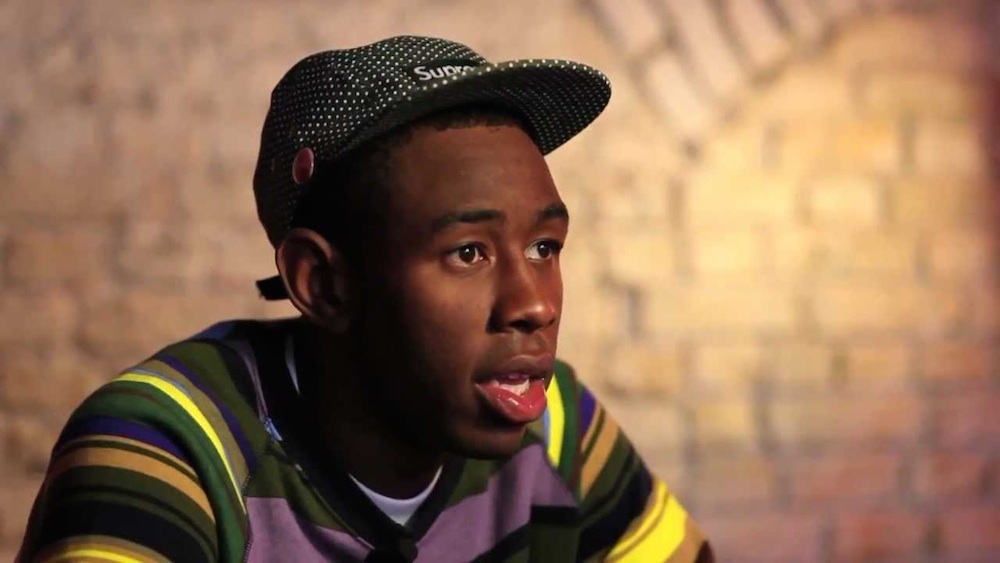 Guess that explains why he’s pulled out of Reading and Leeds then.

You might remember that a few weeks ago Tyler The Creator was banned from Australia for his offensive lyrics and attitudes towards women.

Now, exactly the same thing has happened to him in regards to the UK. Secretary Of State George Osborne sent him a letter saying that his presence is “not conducive to public good” due to his lyrics that “encourage violence and intolerance of homosexuality and foster hatred with views thats seek to provoke others to terrorist acts.” The letter also said the following:

Coming to the UK is a privilege, and we expect those who come here to respect our shared values.

As you can see below through his Twitter, Tyler wasn’t very happy with the decision:

BASED ON LYRICS FROM 2009 I AM NOT ALLOWED IN THE UK FOR 3-5 YEARS ( although i was there 8 weeks ago) THAT IS WHY THE SHOWS WERE CANCELLED.

A more lengthy statement from Tyler’s manager Christian Clancy can be read below, but I think this is pretty much bullshit to be honest. Although there’s no denying that Tyler’s lyrics are juvenile, homophobic and sexist, a) these were nine years ago and b) it’s not like someone like Eminem has been banned from performing in the country and his lyrics are arguably just as offensive. In fact didn’t he headline Wembley stadium last year?

I doubt the Home Office is going to ban him next time he wants to rock through are they? I’m no fan of Tyler The Creator or his lyrics to be honest but this whole set up just reeks of bullshit and has opened up a can of worms for the government whenever anyone with slightly offensive lyrics or a show comes over here to perform. Well done dickheads.

Maybe if they had taken offence at the time he paid a fan £20 to eat his vomit recently, I might have been more sympathetic about the whole thing.

Tyler has been banned from entering the UK for somewhere between 3 to 5 years per a letter from the secretary of state for the home department of the united kingdom. the letter specifically cites lyrics he wrote 6-7 years ago for his albums bastard and goblin — the type of lyrics he hasn’t written since… highlights from the letter include that his work “encourages violence and intolerance of homosexuality” and “fosters hatred with views thats seek to provoke others to terrorist acts..” i grew up on NWA, eminem and rage against the machine, so its hard to me to fully wrap my head this thought process and its implications.

to say that i am confused would be an understatement. can you imagine being beholden to things you said when you were 18? tyler has been to the UK over 20x in the last 5 years without incident (shows, in stores, meet and greets). we rented out a movie theatre last month in London for a private showing of napoleon dynamite for his fans. literally last month.

more importantly, this is a broader issue of free speech, with new lines being drawn that include reaching back in time without acknowledging growth. in fact, punishing growth. what i do know is tyler is part of an argument that is counter to who he has become. how do you punish someone for growing up? since the letter acknowledged he was writing from an alter ego perspective does this then apply to book writers? the fact that he has evolved into someone who has acknowledged and grown out of that is simply lost in the narrative. is he not worthy of the pat on the back for becoming aware and making changes? what message does that send? is race a conscious or subconscious factor at all?

theres a lot to absorb and understand, but while he gets painted as some sort of anti christ i want to make sure people know the facts, which are that he hasn’t delved into those lyrics in years — he writes songs about cars and spreading your wings. he doesn’t drink or smoke, he owns his own businesses, he takes care of his family and friends, he’s honest, grateful, aware, fearless, intelligent, and inspiring. his shows serve as a release, not acts of aggression.

is he perfect? absolutely not. he’s a human evolving like the rest of us, and that process evolution is a process, not a light switch.

im not defending his OLD lyrics. to be honest they make me cringe, but i stand beside him because of who he actually IS. our 8 year old daughter, who is constantly inspired by him, said it best; “why would they ban tyler? that makes no sense.