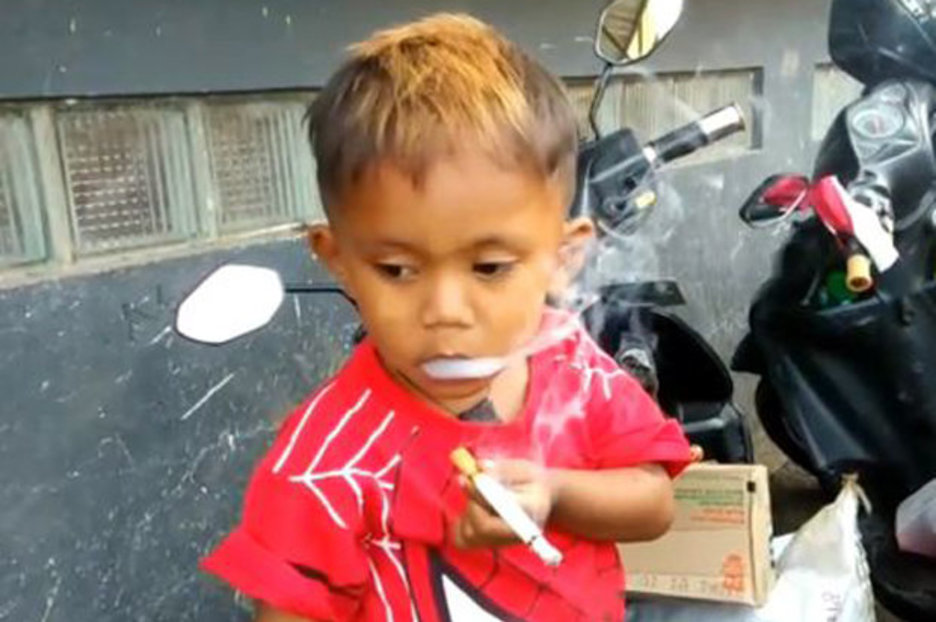 I know plenty of people out there who will get all kinds of anxious and angry if they can’t satisfy their immediate desire for a cigarette, but most of those are grown men and not two year old babies.

There are sadly two year old babies in the world that are addicted to smoking cigarettes though and one of these is Indonesian toddler Rapi Ananda Pamungkas. Rapi is so into smoking that he has a 40 a day habit which put some of the most hardcore smokers I know to shame. He also apparently gets into really, really bad temper tantrums if he isn’t allowed to smoke 40 a day. That’s completely gross huh?

Here’s what Rapi’s mother Maryati had to say about the problem:

My child is used to smoking while drinking coffee and eating cake. He has been smoking every day for around two months. If I don’t give him a cigarette, my child goes berserk.

If Rapi doesn’t get cigarettes he cannot sleep. He will start rampaging and crying. It’s expensive, because we have to buy them for him. He likes to do it all day. He can smoke about 40 every day.

I cannot say no to him when he asks for a cigarette. I don’t even smoke that often. I only smoke at work. When my son smokes he likes to have a cup of mochaccino.

So that kinda implies that Rapi is drinking 40 cups of coffee a day whilst smoking 40 cigarettes which sounds like an awful way for a 40 year old man to be living his life, let alone a two year old toddler. It sounds like these adults aren’t really behind the fact that he’s doing this on the reg, but it doesn’t sound like they’re doing much to stop him partaking in these activities.

I mean surely he can’t light cigarettes or make coffee himself so they could just stop doing that for him and let him have a tantrum like most parents do until he forgets about both of them and starts doing normal baby things like playing with toy trains and that. Just an idea there for you.

For more of the same, check out this Bulgarian family that smoke cigarettes with their toddlers. Family values.