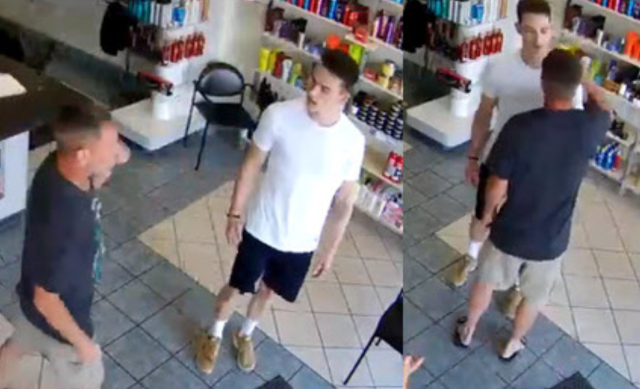 It’s not a good time to be a racist.

As awareness of the BLM movement picks up around the globe and people seek to do more to call out instances of racism, there’s a lot of talk about “allies” i.e. non-black people doing their bit to raise awareness or fight racism in general.

Well one lad named Reavis Hammond over in the States definitely falls under that category, and although it’s never nice to see these things turned violent, I guess a guy brazenly and repeatedly using the N-word and squaring up to anyone who has a problem with it is one of the least sympathetic targets I can think of:

I finally got the video..

Almost two years ago I was in supercuts & this guy walks in & says “Who’s listening to this ni—er music?” & then says the n-word 3 more times.

After I pay for my cut, I confront him about what he said..

Ouch. Like I said, never nice to see these things turn violent but judging by the Likes and comments under the Twitter link, people are pretty satisfied with that outcome. Will be interesting to see if sharing this video of himself beating the shit out of a racist in a barber shop will land Reavis in any sort of trouble, or whether the context protects him. To be fair the other guy looked like he was seconds away from striking first, so maybe self-defence is a good shout in this case. I’m just a lowly blogger though, not a lawyer, so can’t say for sure.

UPDATE – it’s all good as far as Reavis is concerned:

Dude tried to but the detectives watched the same video and all agreed it was self defense. I called the PD right after I left and then went there to give my statement. Had to get ahead of his BS story

For another video of a man (allegedly) using the N word and paying for it, click HERE. Probably best to just not say it anymore if you’re that way inclined.