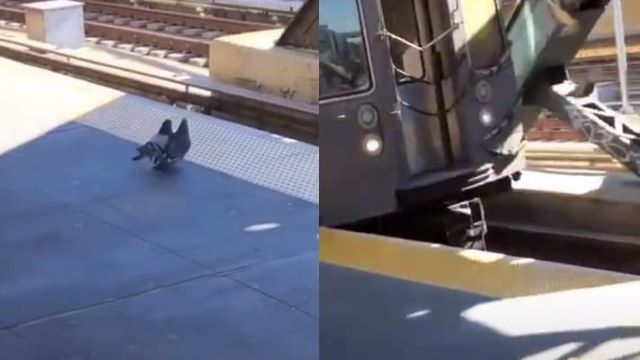 We all know that the New York subway is an absolute hell-hole that makes the London Underground look like a picnic in Disney Land, but I was still shocked to see this clip of a pigeon being murdered in cold blood by two of its fellow pigeon brethren.

The murder was captured on film at Fourth Avenue/Ninth Street station in Brooklyn:

Even in bird culture, I’m sure that’s considered a dick move. They straight up grabbed him by the scruff of the feathers and tossed him under the train like the bird version of The Sopranos or something. Did he owe them bread or something?

As I said, I know New York is a shit hole but you still don’t expect to see brazen daylight murder, even in the pigeon community. I guess we should be thankful they granted their buddy a swift pigeon death rather than claw and peck him to death in some grimy New York gutter by the sidewalk or something. Big up the guy screaming in the background as well. Really added to the overall horror of the video.

For the woman who was fined £150 after a pigeon ate her sandwich, click HERE. Why are pigeons such dicks?