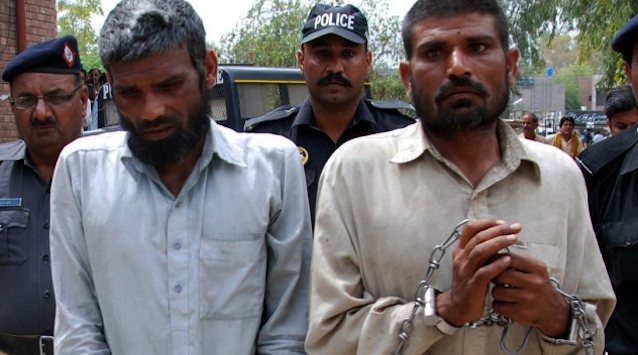 Two Pakistani men were arrested for digging up, cooking, and eating a two day old baby.

A few weeks ago in Pakistan police raided the home of Mohammed Arif(right) and Farman Ali(left) after neighbors had reported a rancid smell coming from next door. The police found the decapitated head of an infant.

After being detained, Arif confessed that the two had cooked and eaten the baby that Ali dug up from its grave. Since there are no specific laws against cannibalism in Pakistan, the two are being charged under anti-terrorism laws and for the desecration of a dead body.

â˜› Read Next: Cannibalism — On The Rise?

This isn’t the first time the body-snacking bandits have terrorized the Punjab province. In 2011, the two were arrested and charged under the same ones presently as they are now. The police found the body of a woman who had recently died of cancer at their house without a leg as the brothers ate it.

They served just two years before being released. Most would think that after such a lenient sentence they would take their loss and move on with their lives but as this incident proves it seems like their hunger was just too much for them to reign in.

The chief of police in the area, Ameer Abdullah, said the two have not had contact with their families since before the 2011 incident and have been living in isolation for many years. He also stated that they will undergo psychiatric evaluations while imprisoned.

To b honest this seems like a waste of time though – if these guys have been charged with the chow-down of two humans and have allegedly dined on dozens more, it’s a pretty good assumption that they’re both crazy. Still, if the last incident is anything to go by it would seem that they’ll be out and looking for snacks in a few years at the most. Bon AppÃ©tit.