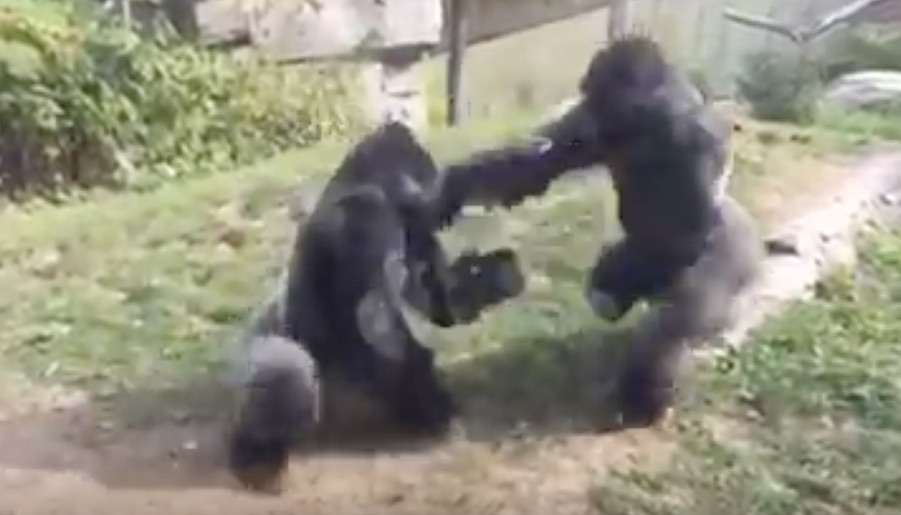 The kings of the jungle go at it.

This video is from the Omaha Zoo over in Nebraska and features two gorillas going at it hard in their enclosure whilst a bunch of spectators look on in stunned silence, with the repeated exclamations from one woman of ‘where are the zookeepers?’ sounding eerily like someone yelling for the school teacher when a fight was happening at school. Except the teacher would probably be able to break that up – not sure about whether the zookeepers would actually be that useful in this situation. Let’s be honest they would probably just end up getting mauled by the gorillas.

Brutal. Can’t really tell who was in the wrong or right or who won there, but you get the feeling that that’s probably going to be a daily occurrence up there now.

I suppose you can’t really blame the gorillas though – I would be pretty annoyed if I was forced to hang out with one of my worst enemies in some enclosure for the rest of my goddamned life. You would probably have to keep fighting until one of you killed the other. I hope that doesn’t happen here, but what else are they gonna do?

For more gorilla action, check out these two 69ing each other. Maybe that’s what these guys should do instead of beating the crap out of each other?