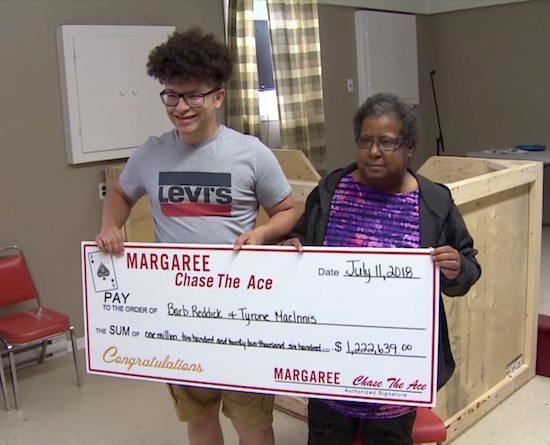 I would probably be happy if I won half a million dollars.

Everybody dreams about the moment that they win the lottery and just how sweet getting handed that oversized novelty cheque is going to be, but even some people who get to experience that moment seem to want to do their best to screw it upon beyond belief.

You’ll see how this can happen in the video below, where an aunt and a nephew both put their names on a ticket for some kind of lottery game called Chase The Ace. I’m not really sure how that works so I apologise, but the aunt in the situation is very unhappy that her nephew is claiming half of the $1.2 million prize money on offer, even though she put his name on the ticket in the first place.

Apparently she’s claiming that she only put it on for luck and that it was never the agreement that if they won they would split the money, but he’s saying otherwise and now she’s threatening to take him to court in order to resolve it. Not sure how they’re going to be able to come to a decision because it seems like a case of the he says she says and the aunt being a complete asshole, but I guess we’ll see how it ends up sooner rather than later:

Hot damn that woman is salty eh? You would think that she’d be happy just to have half a million dollars in the first place – I don’t wanna sound like a dick but she looks pretty old and I’m sure she could do pretty much anything she wants with that amount of money for the rest of her life. And you would think she would be happy her nephew has a tonne of money to try and follow his dreams too. Really awkward, awful situation and she doesn’t come across well at all there. Absolutely not.

I suppose it might not be as bad as what happened to these people though – 7 lottery winners that blew it all.