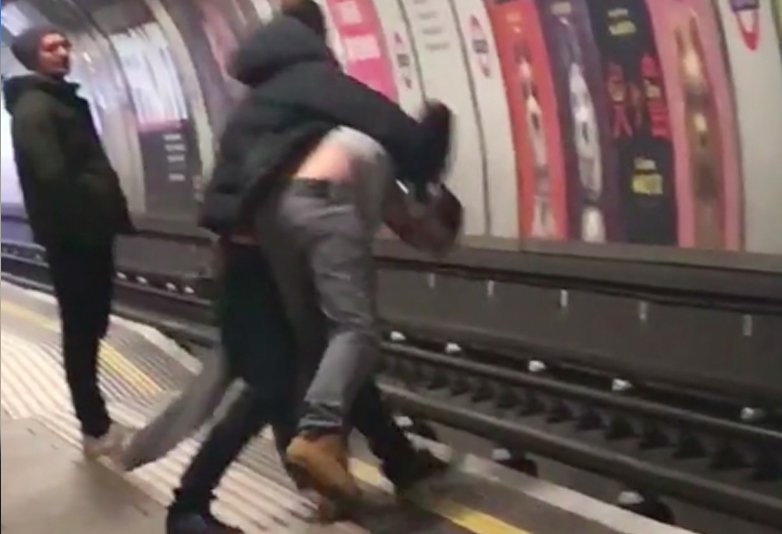 There’s always the danger when you catch the tube that someone might push you onto the track – either by accident or on purpose – if you’re standing too close to the edge, but this very rarely actually happens.

When it does, it’s actually pretty heart-stoppingly horrific and this is perfectly illustrated in the footage you can see below. It’s taken from Sunday April 1st at Green Park station in London where 34 year old Boguslaw Rybski was messing around with 26 year old Przemyslaw Zawisza as they waited for their night tube to arrive.

Being at night on a bank holiday, the pair were obviously drunk and didn’t realise how close they were to the edge of the platform when their play fighting went a bit too far and they both fell onto the track in front of the oncoming tube. Fortunately they were both able to jump out of the way of it before it ran them over with the help of some people on the platform, but Jesus Christ it was close:

I guess they couldn’t save the guy’s hoodie eh? I know it looks like the one guy gets run over but if you look closely he jumps out super quickly almost as soon as he falls down there, unfortunately losing his hoodie though.

Following this, the train was delayed for 15 minutes at the station until the police arrived to take them away, causing severe delays on the Victoria Line. Fantastic. They were both bailed and are due to appear in court on April 19th.

Anyway, if this doesn’t serve as a reminder to not mess around near the train tracks – especially when you’re drunk – then I don’t know what does. Ridiculous way to mess around like that anyway. Guys are lucky they’re not dead.

For more people falling on the tube tracks, check out this guy in Switzerland getting thrown onto the tracks during a fight. Another close one.