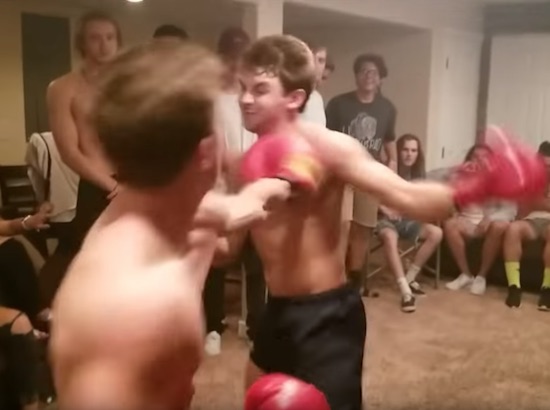 It’s well known that frat guys will do pretty much anything to try and impress girls, but I don’t think I’ve seen any of them have an illegal boxing match in their basement yet to engage in this pursuit – until now.

Someone, somewhere thought that this would be a good idea and that it wasn’t going to lead to any trouble at all or be completely wild and just get in everyone’s faces and cause everyone to scream because it was so violent and people were actually getting the crap beaten out of them. Of course, the exact opposite happened as you can see in the video below:

Damn, the kid that looked like Sage Northcutt got pretty battered by Anthony eh? I love the way that he just keeps coming back for more and telling the guy to come on – that’s probably why I reckon they both did a bump of coke before the fight, although to be fair they could end up feeling that way because of the adrenalin on the fight. Knowing frat guys though they almost certainly did a bump as it would definitely make them more confident and the girls like them more. Pretty much a foregone conclusion if you ask me.

Gotta take one minute to shout out the quality of the boxing on show here too. Loved the way neither of them really had their guards up the whole fight and they both just concentrated on hitting each other with massive big hooks. Real inspirational style there – wonder why none of the big fighters use those kinda techniques?

For more of the same, check out Bobby Gunn – the legendary bare knuckle boxer putting his 70-0 undefeated record on the line. That’s a real boxer.