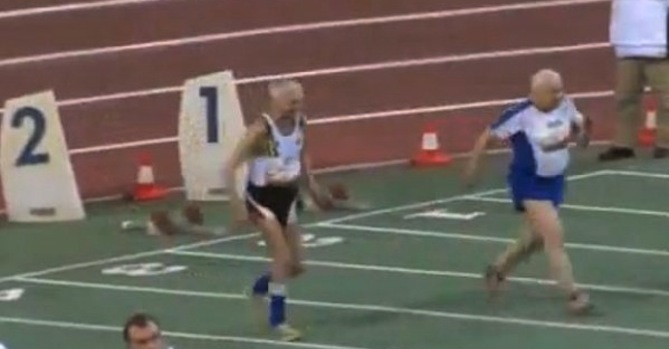 Watch these two nonagenarians put your out-of-shape ass to shame by racing each other in an 100 metre dash.

Meet Finland’s Ilmari Koppinen and Belgium’s Emiel Pauwels, two nonagenarians who aren’t going to let sore joints and brittle bones stop them from competing against each other in a hundred-metre dash.

This is going to sound patronising – obviously these are two very proud and admirable men – but the way they run is ADORABLE. I never saw my Granddad run but I’d imagine it would look something like these two, albeit a bit slower and with a spectacular hip-breaking finale.

It seems like there’s going to be a clear winner from the get-go, but sneaky Pauwels is just biding his time until his unwitting opponent has exerted enough energy, then speeds up (or maybe Koppinen slows down, it’s hard to tell) the last ten minutes to take the victory.

It’s the same technique used by marathon runners, or 800 metre runners, but we suppose it translates well to an 100 metre sprint between two 95-year olds.