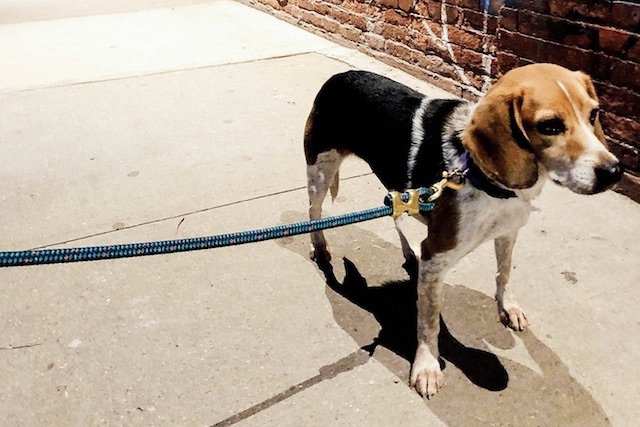 It’s no secret that people on Twitter love to jump in with their opinions and absolutely destroy people for sharing ones that they don’t agree with and the latest person to feel the wrath of the social media platform is journalist Madeline Bills.

Bills wrote quite a lengthy article about her decision to euthanise a 6 year old beagle named Bonnie after multiple attempts to train her and rid her of the crippling anxiety that she suffered from that caused her to bite multiple people and act really violent a lot of the time. Bills says that Bonnie’s emotional issues were not disclosed to her when she was adopted and she was unable to train her, return her to a shelter or rehome her and so eventually instead decided that behavioural euthanasia was the best option for the pair of them.

That sounds remarkably cruel the way I wrote it, but you should probably read the whole article before passing judgment on Bills. This paragraph in particular communicates what a difficult decision this was:

As the weeks went by and no new options appeared, I realized I had a choice: I could send her off with a stranger one day—someone she would certainly injure, and who would perhaps end up euthanizing her anyway—or I could allow her to leave this terrifying world peacefully with someone she loves.

It really does sound like a heartbreaking decision for Bills and one that she didn’t come to lightly and only after she exhausted every other option – and also one that still clearly affects her and haunts her today. O bviously Twitter didn’t see it this way and she was roundly annihilated and condemned for being an awful person by a bunch of people who probably didn’t even read the article and just glanced at the headline:

This amazing pug was adopted after either being on the st and/or abusive home. My GF worked w/ him for years because he was super defensive/nippy after what he had been dealing with. He has his moments but so so loving. Spare with your sorry ass weak story on how you killed a dog https://t.co/0YRrbhFVn7 pic.twitter.com/BQBrgHsb60

When someone dumped off this 8 year old beagle in 2017 they said she was mean, bit people, hated everyone and couldn’t be near kids.

Turns out, it was just the owner.

My sweet girl is now 12 years old and my toddlers best friend.

Fuck everything about this person. https://t.co/RgcbNT3Wee

WHAT THE FUCK IS THIS https://t.co/9pHYPrg9AT

Everyone, I did something awful but I’m the true victim https://t.co/ge0n0ilYjk

spoiler alert: she didn’t have to make the decision https://t.co/b6AIIiXyTy

This person needs to be banned from owning a dog for life. Owning a dog is not a novelty it’s being responsible for a life. It’s not a fun little gift it’s something you need to take care of. She’s an absolute piece of shit. https://t.co/VjMuRFxVay

No sympathy for dog murderers https://t.co/oKvYa9c5bP

Yikes. Obviously Bills hasn’t tweeted at the time of writing in response to this, but you really have to think about why she wrote this article in the first place before coming for her? Clearly she did this because there was some financial incentive behind it – probably only like £200 if she was really lucky and probably less tbh – but I think in general that journalists write articles like this because they’ve been through a really tough situation and want to impart their knowledge on the subject so that they can help other people that might face a similar situation in their life.

With that in mind – and given that she’s just had to euthanise her own dog FFS – the last thing she needs is a bunch of strangers on the internet telling her what a twat she is. But here we are again. Hope we don’t hear about anything bad happening to her in the wake of this. Slate should probably give her a bonus though because engagement is through the roof. Hopefully the article did at least help some people that may be forced to make the same decision at some point in their lives.

For more of the same, check out this story about a dog that was put down so it could buried with its owner. Is that right either?