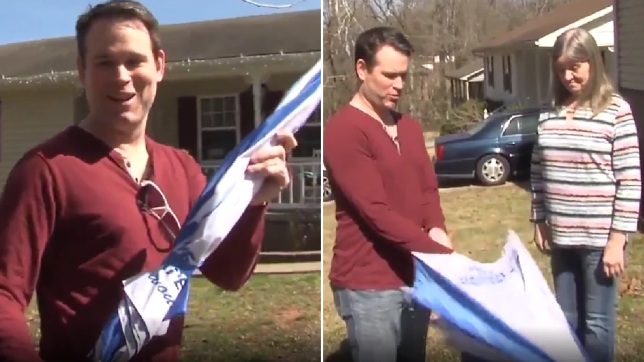 “Sorry your house burned down – here’s an umbrella.”

A local TV station is being ridiculed this week after its chief meteorologist surprised a woman who’d lost her home and her sister with a special gift – a shitty umbrella with his autograph on it.

ABC13 in Halifax County, Virginia, sprung the surprise on the woman named Mary a week after her sister was killed in a car crash and her house burned down on the same night.

For some bizarre reason, ABC13 thought this umbrella would cheer her up. They’ve since deleted the whole story from their website but naturally it’s been saved all over the internet:

“Sorry your house burned down. Here’s an umbrella.” – ABC pic.twitter.com/fVGYQyLRW9

I couldn’t actually believe this was a real story but I’ve looked into it and it’s 100% legit. Apparently the woman’s daughter had mentioned to ABC13 that one of the items her mum lost in the house fire was an ABC13 umbrella, so they thought it would be amazing if they got her new one and recorded a whole segment around it while she’s just standing there trying to be polite.

I mean if my house burned down and someone tried to make me feel better by gifting me an umbrella, I don’t think I’d have any other choice but to burn their house down and then give them the umbrella back. Surprised poor Mary didn’t impale him with the umbrella right there and then on camera.

Good luck to Mary and her family as they get back on their feet. Surely someone will have started a gofundme by now?

For footage of a man who tried to burn down a synagogue but ended up turning himself into a human fireball instead, click HERE.