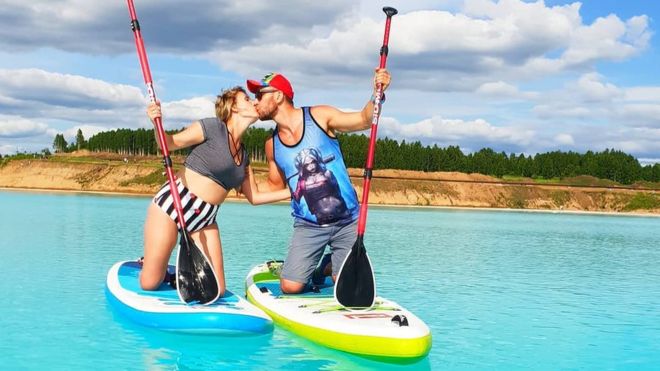 How far would you go for the likes?

Dubbed the “Novosibirsk Maldives”, a lake over in Siberia has been attracting Instagrammers who travel to take a picture while swimming in its glaringly bright turquoise waters.

However, there’s a reason the lake is so bright and it ain’t Mother Nature. Turns out, the site is a highly toxic artificial pond used to dump ash from a nearby coal plant. No wonder it looks like it’s glowing…

The company that runs the plant has spoken out about the number of people taking Insta-ready snaps at the site to warn them that it’s not safe for swimming in.

The Siberian Generating Company told Russian social network VKontakte that the water is filled with calcium salts and other metal oxides from the plant that can cause serious skin allergies.

In the last week, our ash dump of the Novosibirsk TEZ-5 has become the star of social networks.

But you CANNOT swim in the ash dump. Its water has high alkaline environment. This is due to the fact that calcium salts and other metal oxides are dissolved in it.

Skin contact with such water may cause an allergic reaction!

Surely anyone who spends their life updating their Insta account is not going to cope well with a skin rash. And the dangers don’t end there, as the company went on to describe how the lake’s bed is so muddy that it’s almost impossible to get out of.

This was clearly the bit they wanted to stress the most. How do we know that? Because they wrote this part of the statement in full caps:

THEREFORE, WE ASK YOU VERY MUCH THAT IN YOUR QUEST FOR A SELFIE YOU DON’T FALL DOWN INTO THE ASH DUMP! THIS IS THE BIGGEST RISK.

Has the threat of a potential skin rash, and perhaps even certain death stopped social media addicts heading down to the lake in the pursuit of the perfect selfie? No, of course it hasn’t.

Marina Zheleznova, a Siberian woman who staged a photoshoot by the lake with her partner, told CNN:

We know that the lake is toxic and didn’t enter the water.

This didn’t stop some Russians to organise whole picnics by the lake. One man even bathed there, which is strictly forbidden.

While we’re on the topic, check out the influx of influencers heading to Chernobyl’s exclusion zone to take risky profile pictures. What’s a little radiation poisoning when you’ve got ten new followers, am I right?