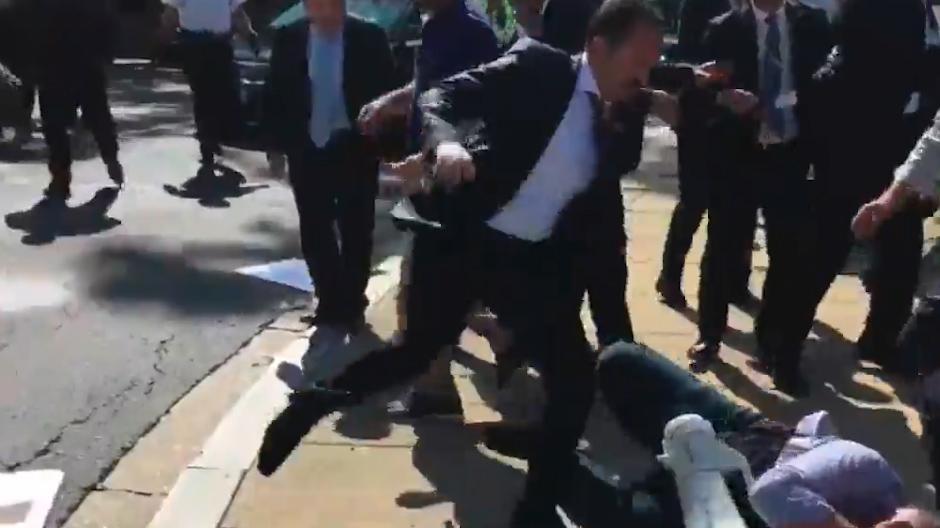 Killing in the name of.

Donald Trump and Turkish President Recep Tayyip Erdogan are two of the most hated leaders in world politics at the moment, so something was bound to happen when the two of them met today in Washington D.C.

Whilst Erdogan was enjoying an office with Trump in the White House, Kurdish and Armenian people took to the streets to protest against his alleged civil rights abuses. This obviously didn’t go down well with a bunch of Turks who had also taken to the street to celebrate their President, and there was soon a mass brawl between the two sets of people, with Erdogan’s bodyguards apparently getting involved and nine people ending up in hospital, one in critical condition.

Kurdish and Armenian and Ezidi protestors brutality attacked by members of Erdogan security in front of Turkish Emb pic.twitter.com/StrRKgNHfr

All of the sudden they just ran towards us.

Someone was beating me in the head non-stop, and I thought, ‘OK, I’m on the ground already, what is the purpose to beat me?’

No shit. Why can’t we all just get along?

Washington Police eventually showed up to sort out the riot, but it seems like another unwarranted blip on both President’s copybooks. How many more do they need until they both get impeached?

Possibly not that more at least in Trump’s case, according to White House insiders – we can but hope.