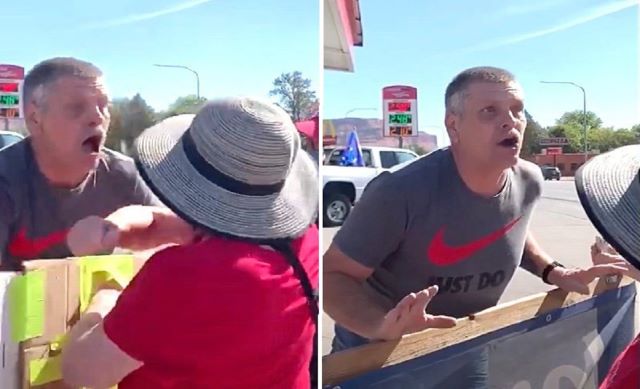 That is one serious cough.

A Trump supporter over in Utah has landed himself in hot water after confronting a bunch of BLM protesters, saying “black lives don’t matter, all lives matter”, and then I guess demonstrating his point by unleashing a mega cough attack all over the people standing in front of him.

The altercation took place outside a gas station in Kanab, Utah, near its border with Arizona:

The guy is so braindead that in the full version of the video, he actually identifies himself as Robert Brissette and tells people to “find me on Facebook”. When this footage first appeared on Reddit, users noted that Brissette set a land speed record at El Mirage back in 2014 following the death of his son via suicide in 2011. Which makes you feel bad for the guy but of course, you can’t just go around stirring trouble and coughing in people’s faces, especially in the age of coronavirus.

In the end Brissette set up a GoFundMe because the incident landed him in trouble with the police. He raised $35 before the GoFundMe was deleted, but he had written the following explaining his side of the story:

On Saturday 10/10/20 I was attacked by BLM protesters in Kanab Utah.  I now have legal issues do to this. .. What happened I was pumping gas had my Trump flag on my truck. Some other random guy Rolled Coal from his truck on some BLM/Biden people that were on the corner. Every one around me was laughing. Two of the protesters threw rocks at me. I went to confront them and was totally verbally attacked. So without touching anyone I called out the BLM at this point someone started recording it. During my rant two women hit me. And now I’m being charged with starting it.  I need help to clear my name against these race baiting protesters.

The BLM member has made a video go viral. And it only show me calling them out. It does not show 1st 5 mins were I was being assaulted with rocks and verbal attacks. Also there is a video show me go after a guy but it starts after he messed with my truck while I was in the gas station. I’m getting charged with 5 different crimes and my reputation trashed. help me to combat these people.

Welp, shame there’s nothing on camera to back up his side of events. Not a great look when the only evidence an incident even took place involves you being the instigator and coughing and spitting all over people. While coughing on someone has always been classed as assault, he might have got away with it in the pre-coronavirus days. Not anymore it seems.

For the woman who ‘got back’ at a mother by coughing in her one-year-old’s face, click HERE. What is wrong with people?