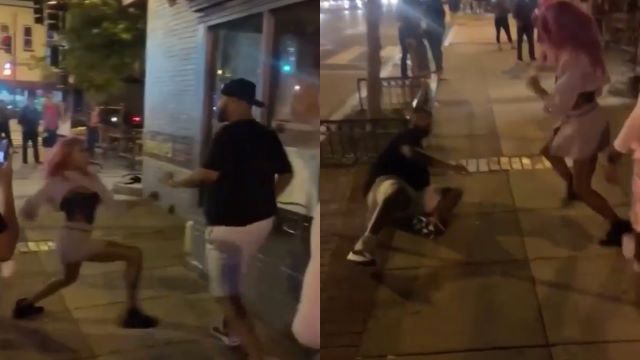 It’s free to mind your own business in this world and really unless someone is encroaching on your space, rights or personal life, it’s best to just leave them alone and go about your day.

That’s hopefully the lesson learnt by this guy over in Washington, DC this week after he apparently ‘harassed’ a trans woman in the street and ended up eating a trans knuckle sandwich for his troubles:

Oof. Was looking a bit wobbly there wasn’t he? Proper spaghetti legs after she landed that first hit. What’s funny is that he seems in two minds throughout the confrontation whether he should engage in an actual fist fight with a trans woman, because maybe he wasn’t sure if it would equate with hitting a biological female. By the time he made his mind up though she’d already dropped him. Unlucky.

Obviously we’re not advocating violence here and in an ideal world these two would just ignore each other, but it looks like this trans woman was not prepared to take any shit on this occasion. Lesson learnt.

P.S. Where was this person when trans Instagram model Eden The Doll got beaten up & robbed in Hollywood last week? Could really have used her help from the looks of it.