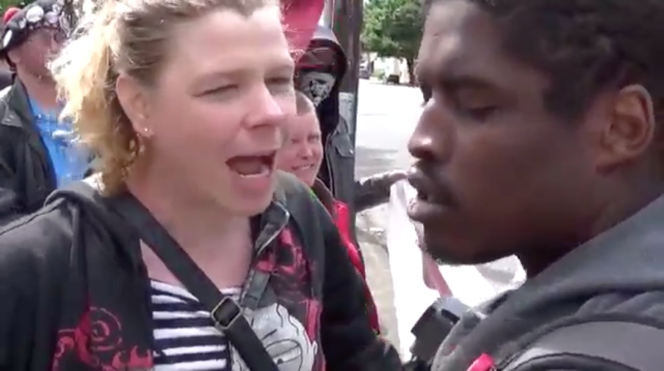 These Antifa protests over in the States have been getting out of hand for the last few years. What happens is a bunch of (usually) masked protesters show up to protest fascism, which is all well and good but it always ends up seeming like they just want to raise hell and cause havoc and fight people who don’t agree with everything they say.

At one such protest over in Portland, a transgender Antifa protester gets in the face of a man who appears to disagree with her politics, and when he refuses to back down, this happens:

Firstly, massive FU to the bell-end waving that flag in front of the camera, but at least we caught the crucial moments at the end.

I don’t think anyone would accuse these two of being natural born fighters but it is funny how the crowd only started freaking out once the man hit the woman. What did she expect? It’s a shame anyone has to get punched at the things but admittedly always somewhat satisfying when there’s just retaliation.

To watch middle-aged Scottish women hurl pint glasses at each other in a Wetherspoons Brawl, click HERE.