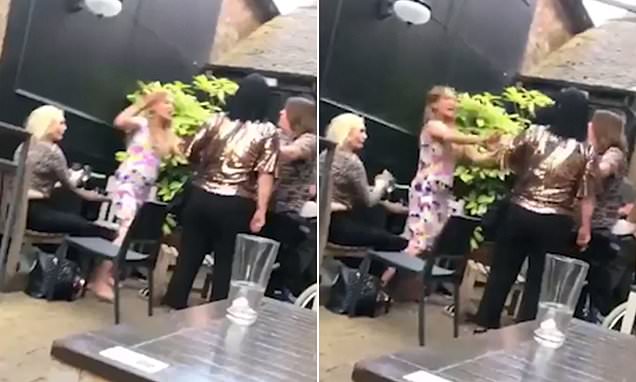 Karen vs Sharon… who’s your money on?

It can go one of two ways when it comes to a Wetherspoons day sesh. Either you have a great time with pals while getting sozzled on the cheap, or you become caught up in a booze-fuelled brawl and have to exit before shit gets nasty.

This story falls into the latter camp, as a group of middle-aged women over in Scotland were filmed going in on each other. In a Wetherspoons beer garden. In the daytime.

Dressed to the nines in their fanciest gear, the women can be seen screaming at their opponents, as others gather round to try and diffuse the situation.

In the midst of a lot of glass smashing and angry shouting, one woman resorts to picking up a pint glass and hurling it at another, leading to more of the same.

You’ve got to laugh at the dude’s reaction to the fight – like it’s just another day in the Wetherspoons garden.

The footage was taken in The Wishaw Malt in Lanarkshire, Scotland, and has since led to the culprits being barred. A spokesman said:

We can confirm that an incident took place in the beer garden at The Wishaw Malt.

The situation was dealt with swiftly and efficiently by staff at the pub, and nobody was hurt or injured.

The police were called, as standard procedure.

Wetherspoon does not tolerate any form of anti-social or aggressive behaviour and the people responsible have been barred from the pub.

No more cheap nights out for those ladies.

For the time a man bit off the head of a pigeon outside a Wetherspoons, click HERE.