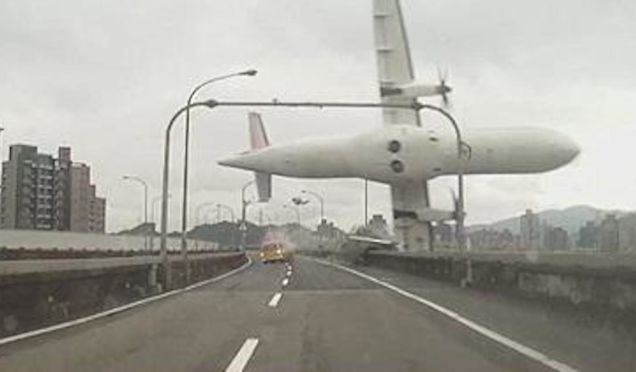 Don’t watch this video if you’re catching a flight any time soon.

A small TransAsia flight carrying 58 people flying from Taipei to the offshore island of Kinmen crashed shortly after takeoff this morning, with several websites now reporting fatalities and injuries. It seems like anywhere between two and nine people have died, whereas dozens of survivors have been hospitalised by injuries.

These include a taxi driver whose car was clipped by the plane as it descended into the river. He suffered a concussion and head injuries but is said to be stable – the same can’t be said of his cab though:

TVBS: Taxi cab was clipped by #GE235 as it descended into river in Taipei. #Taiwan #TransAsia pic.twitter.com/YuvtTl9xUP

It’s not known at this time what caused the crash, although you can see on the video below that was taken by a dash cam (which we all know can get pretty crazy) that the plane clearly clips a viaduct running across the highway and that seems to cause it to fall into the Keelung River. The plane already looks out of control at this point though so it’s safe to say there was some kind of problem during take off which led to this point.

You an see some footage of the horrible incident below, recorded from the dash cam. This is the second bad crash in a year for TransAsia airlines, with the previous one coming last July when 48 people died when Flight 222 crashed in a storm near Penghu. We can only hope that the death count doesn’t rise as high as that during this incident.