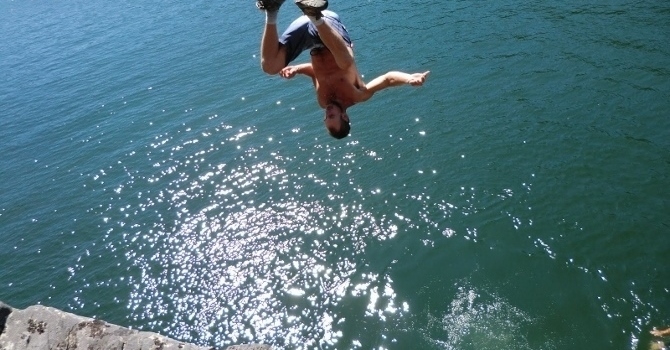 Cliff-diving is always cool, but it’s cooler if it’s in Arizona and you’re diving off cliffs using a trampoline. Edgy. Check it out.

I’ve only been cliff-diving once and that was a long time ago but I still remember it as being pretty decent and it sorta gives you a buzz, but nothing like your usual nostril/gum fuel. The cliffs I went diving off are huge and the drop is something like 50 foot and the first time you do it, you’re thinking: ‘Shit, man, I’m gonna die if there’s a sharp, ugly piece of rock sticking up from the bottom. It’s gonna stab into my belly and bleed me out while I drown,’ but there never is a piece of rock waiting for you and as the water erupts around you as you land in it the feeling is immense and you just wanna do it again and again. Like that scary-looking rollercoaster in Oakwood or something when you were a kid, you just can’t get enough. That is until you’re chugging your eighth can in the sun, on the cliff, and another jump will make you chunder all over.

â˜› Another Reason To Chunder: We Check Out More Of The World’s Most Disgusting Delicacies

I live in a place where there’s hardly ever sun and all of us have had surgery to attach umbrellas to our arms so that we don’t get wet every time we step outta the door. When we do get sun, everyone goes nuts and there’s grannies lying on roads with their tits out and cans of Stella and packets of Iceland burgers form mini-mountains on street corners, while Darude and Fragma sweep through the air like the smell of festival toilets. The sun only comes out twice a year, though, so it’s cool.

â˜› Sun Perv: You Think Our Sun Is Big? Check This Out

The day I went cliff-diving was one of those two sunny days and there were tits everywhere and you had to find shade just so your cans didn’t become fireworks and if you didn’t have any sun block on you’d have fried like meat on a spit. I had a good time and I really wanna go cliff-diving this summer – if you’re free, gimme a shout – but these guys, who went diving in Arizona had a much better time by the looks of things, as the water isn’t full of sheep-shit, the weather looks more glorious than it did in my episode (but it’s in Arizona so that can be expected) and they jump off the cliff using a trampoline. Yes. A fucking trampoline. Check it out, the music ain’t too bad either.