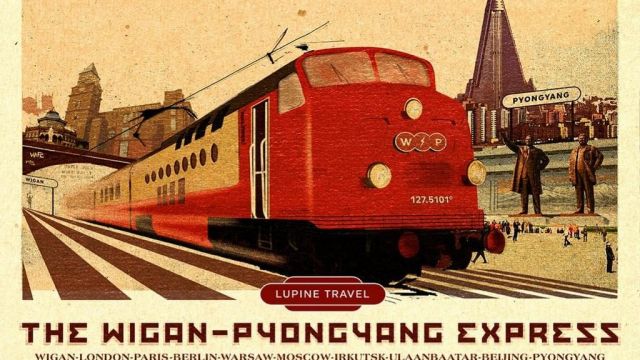 North Korea is a legitimately fascinating place that I’m sure most of us thought we would never be able to visit because of the fact that it’s pretty much just a sealed off kingdom with no real access to the rest of the world, but it looks like that might be set to to change with the arrival of the Wigan-Pyongyang Express.

Yes that’s right, for some reason Lupine Travel have decided to run a sleeper train from northern England all the way to North Korea. Whilst this might sound attractive to begin with, there are a couple of catches that might make it sound less than appealing. Other than the whole visiting a totalitarian regime that you might not be able to get out of alive thing of course.

Next year will see the launch of the first ever Wigan to Pyongyang train journey!

Firstly, the journey is going to take a whole month to get from Wigan to Pyongyang which means you’re going to be sitting on the train for the best part of a month. I’m sure you’ll see some wonderful scenery though and the train does stop in London, Berlin, Warsaw, Moscow, Irkutsk and Ulaanbaatar. Hopefully you’ll be able to get off and spend the night (or two!) in these countries as you’ll be on the train for a goddamn month but that isn’t clear at this point.

The second major turn off is the price as the journey is going to set you back £3,195. This does include tour guides and meals for four nights in North Korea, but doesn’t include the price of the multiple visas you need to enter any of these countries. Probably doesn’t cover however you get back either. I suppose that isn’t bad because technically you’re getting accommodation and travel for the best part of 30 days, but if it’s not including food and drinks as well I don’t think I’m interested. It’s a hell of a lot of money.

The funniest thing about all this though is the fact that the train journey is starting in Wigan. Out of all the places in Britain it could have started that’s gotta be one of the least glamorous. The Wigan-Pyongyang express doesn’t really have the same ring to it as the London-Pyongyang Express, the Manchester-Pyongyang Express or even the Liverpool-Pyongyang Express. Talk about budget. Classic North Korea though I suppose.

For more of the same, check out these never before seen pictures of North Korea. Guess they might save you that £3195.