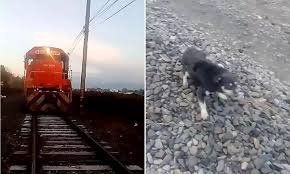 Most people out there agree that dogs are a man’s best friends, but even those of us that aren’t so keen on them would probably agree that they don’t deserve to be tied to a train track and obliterated by a speeding train.

Fortunately this isn’t what happened in Llay Llay in Chile, where a heroic train driver managed to stop the train in time and rescue the dog that was tied to the side of the track just seconds before he would have been destroyed. The guy even filmed the rescue, questioning how any human being could ever be capable of doing something like this to a dog. Sentiments that I gladly echo.

Just really does make you despair that someone would do that to a dog doesn’t it? Can’t really think of a good reason why that would be an option because even if you couldn’t afford to look after it anymore or whatever you could just give it to a dog kennel or leave it locked up somewhere and run away. To full on brutalise and kill it in the most horrible way possible seems a bit much, doesn’t it?

The mayor of the town Edgardo Gonzalez said the following about it:

We are shocked by the cruelty seen in our society.

We condemn and reject this incident against a defenceless animal, and we are thankful for the behaviour of the driver who saved its life.

As a municipality, we are taking the actions that need to be done [and are filing] a criminal complaint against the culprits and we also contacted the driver to offer our help to give this little dog the veterinary attention and other things it needs.

We will also find a way of putting the little dog up for adoption.

That’s nice. I hope that the people that did this get found and imprisoned because it really is horrendous behaviour to be doing this. And once again a shout out to the train driver for being so awesome and saving this dog’s life. Props.

For more of the same, check out this dog almost drowning after being forced to shoot a movie scene. Terrible.