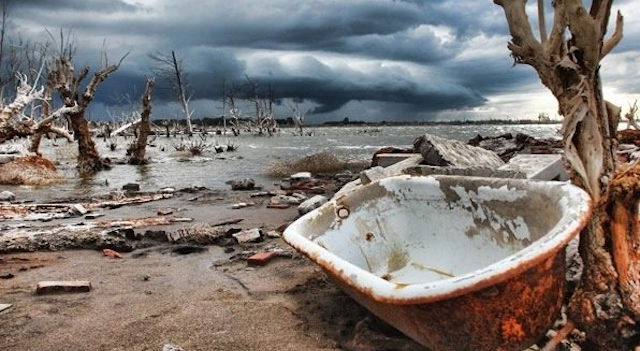 This town is called Villa Epecuen and it’s located in Argentina just south of Buenos Aires. It was founded in 1920 and was a popular tourist destination in Argentina – that is until a dam burst in 1985 and literally the whole town was flooded underwater with salt water.

At first, residents hung out on their roofs as they thought that the waters would subside but after a couple of days everyone pretty much got the picture that they weren’t going down anytime soon and decided to leave the city, effectively abandoning it. It was a good thing they did too, because the waters didn’t subside for another 25 years.

It now looks like a post apocalyptic wasteland. Dead trees and rusty junk line the roads, whilst a bunch of signs point to nowhere. It’s pretty grim. Amazingly, throughout the whole 25 years of the town being underwater, one resident did manage to survive there.

His name is Pablo Novak and you can see a picture of him right at the end of this series – he lives in a stone hut with a basic cooker and a fridge. I’ve got no idea why he wanted to live in a town with nobody else in it that was submerged in water for 25 years, but fair play to the guy I guess.