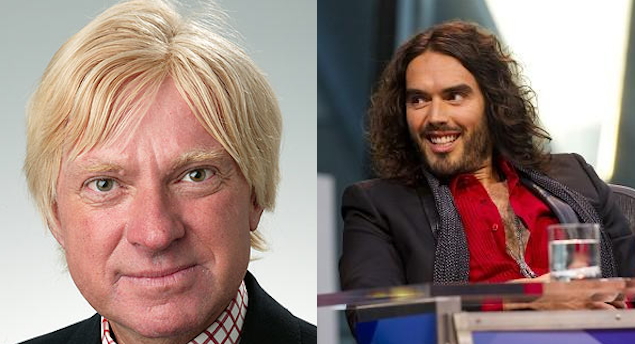 Following his almost legendary Newsnight interview last week, a Tory politician has come out and called Russell Brand a twat live on air. Find out what he said here.

Judging by how many hits and shares it got on the site, pretty much everyone saw Russell Brand’s interview with Jeremy Paxman on Newsnight last week where he called for a social and political revolution and shared his dreams of an egalitarian socialist utopia.

Although everyone SEEMED to love it, the backlash started almost as soon as the fanfare, with many people stating that Brand’s interview was pointless and deluded as he didn’t really say anything useful in it but instead just spouted a load of crap. Critics argued that didn’t really offer any solutions to any of the problems he was discussing and pretty much purposefully ignored most of the questions he was asked directly choosing instead to talk about another topic entirely using a load of big words that nobody really understood and a lot of enthusiastic hand gestures. Kind of like a real politician.

One person who was perhaps the most scathing of Brand was actually a real politician – Tory MP for Lichfield Michael Fabricant, who has branded Brand (like it?) a twat after the interview. Speaking on Radio WM to presenter Adrian Goldberg, he offered a response to Brand’s claims that all politicians are guilty of ‘lies, treachery and deceit.’

Here’s what he had to say: ‘I’ve never heard so many big words used to such little effect. He [Brand] had absolutely nothing positive to say, he just said what we shouldn’t do, nothing about what we should be doing. When you start using big words — ‘paradigm’ and things like that — and still don’t actually say anything positive you think ‘what a t**t’.’ Here’s a few of the best:

Ouch. Since then, Fabricant has taken to his Twitter account and retweeted messages of support of people who agreed with him, using the fairly unoriginal hashtag #twatgate.

I am following @Mike_Fabricant for no other reason than he called Russell Brand a twat -well done Mike!

My local MP called Russell Brand a twat and he is now using the hashtag #TwatGate. @Mike_Fabricant for PM. – Lydia Wilson (@LydiaRWilson) October 25, 2013

Have to agree with @Mike_Fabricant , @rsutyrockets does come across as a bit of a twat . . Einstein was right about explaining things simply – Jorge Orwell (@Jorge_orwell) October 25, 2013

@Mike_Fabricant @hjoneshojo Bravo Michael, I cant stand the twat either.

However, even though it’s easy to condemn Russell Brand’s ‘interview’ for not really saying anything, I’m sure the general population (including all those haters) won’t be too happy about the fact that the Houses of Parliament announced a new £250,000 gym facility yesterday – which of course will be paid for by the tax payer.

In fairness, most politicians do seem to be kind of fat so it’s probably a good idea for them to have some kind of facility with which to sort this out. Considering that MPs have to pay a membership fee to join though, it seems ridiculous that the upgrades to the gym will come out of taxpayer income rather than the income the gym receives from its own private membership fees.

Again, it’s just another abuse of power from the incumbent government, and it goes to show that even if Brand didn’t have any answers than at least he was pointing out some of the problems with the current government to a population that might not have a clue about them. Like him though, I unfortunately don’t have any answers for how it can all be sorted out. Except of course that inevitable ‘revolution.’