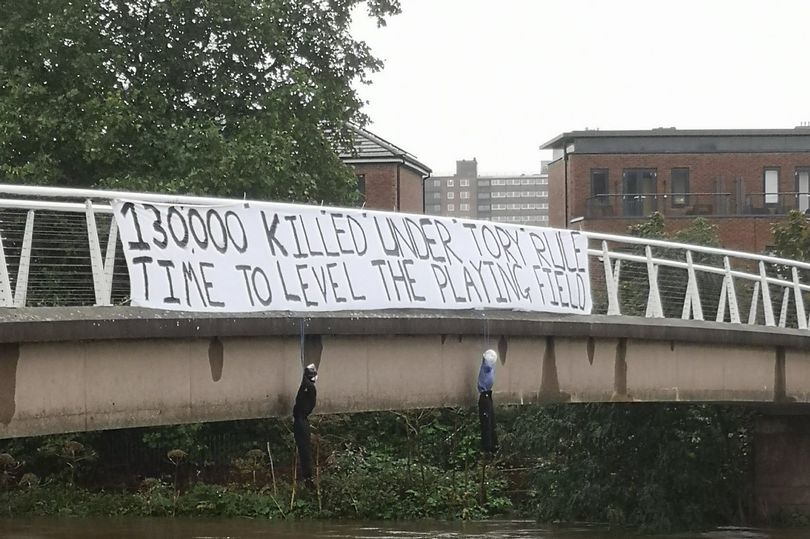 Political tensions in the UK are the highest they’ve been at in a long time, but I think any sensible person would agree that this banner that went up in Manchester over the weekend is just a tad OTT.

The sign, which was accompanied by hanging effigies, was put up on a bridge in Salford as the Tory Party conference kicked off in Manchester.

It was also tweeted out by Manchester Momentum, the pro-Corbyn wing of the city’s Labour party alongside this message (since deleted):

Manchester Momentum weren’t behind the banner, they tweeted about it and then deleted the tweet because they realised it was inappropriate.

Nobody has yet claimed responsibility for the banner but the Labour mayor of Manchester condemned it as “unacceptable”.

The figure refers to an estimate by a think tank which claims the Conservative policy of austerity resulted in the deaths of 130,000 people.

Neve have I felt more apprehensive than seeing this in my morning run pre #CPC19. Does this classify as death/terrorist threat? Utterly vile. pic.twitter.com/3beha85IaW

Looks like it doesn’t matter what side of the political divide you’re on, there are always people who have to take things to the extreme and ramp up the grim, tasteless rhetoric. Surely the people who put this banner up realise they are doing themselves no favours and in fact give the Tories the chance to be victims and use this as political ammunition in the future.

Which makes you wonder whether there’s a chance a sneaky Tory shit-stirrer put this up? Hey, it’s possible. But even if they did, those morons at Manchester Momentum retweeted it so they’ve shot themselves in the foot anyway.

However you feel about it, it’s a bloody embarrassing time for British politics. Oh well, at least there aren’t any videos of our Prime Minister in blackface out there. Yet.