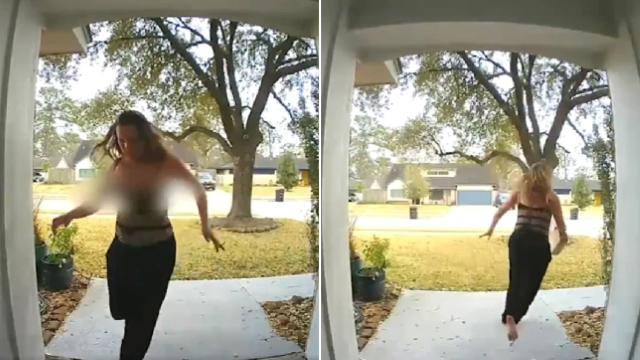 It’s not easy being a porch pirate these days. Most people are not only at home due to the pandemic but also have Ring cameras installed watching their front doors, though at the same time the huge upswing in online shopping has been too great to resist for these cheeky buggers.

Here’s an example from Houston, Texas, in which one woman is in such a rush to steal a package and get the hell out of there that her tits completely spill out of her top:

CAUGHT ON CAMERA: Package thieves will usually stop at nothing to claim their prize. For this woman, even losing her top did NOT slow her down…. andddd it was ALL caught on camera. 😳😳 Precinct 1 and @ConstableRosen are investigating. @KHOU pic.twitter.com/RsqLbGdQBg

Or maybe this was part of her plan? Go around stealing packages from people’s porches while topless so that despite being caught on Ring cam, homeowners and the police would be too distracted by her boobs to ever look at her face and figure out who she is? Pretty smart if so. Let’s see how that works out for her.

To watch another porch pirate catch an instant dose of karma when a homeowner arrives home just in the nick of time, click HERE. Love to see it.