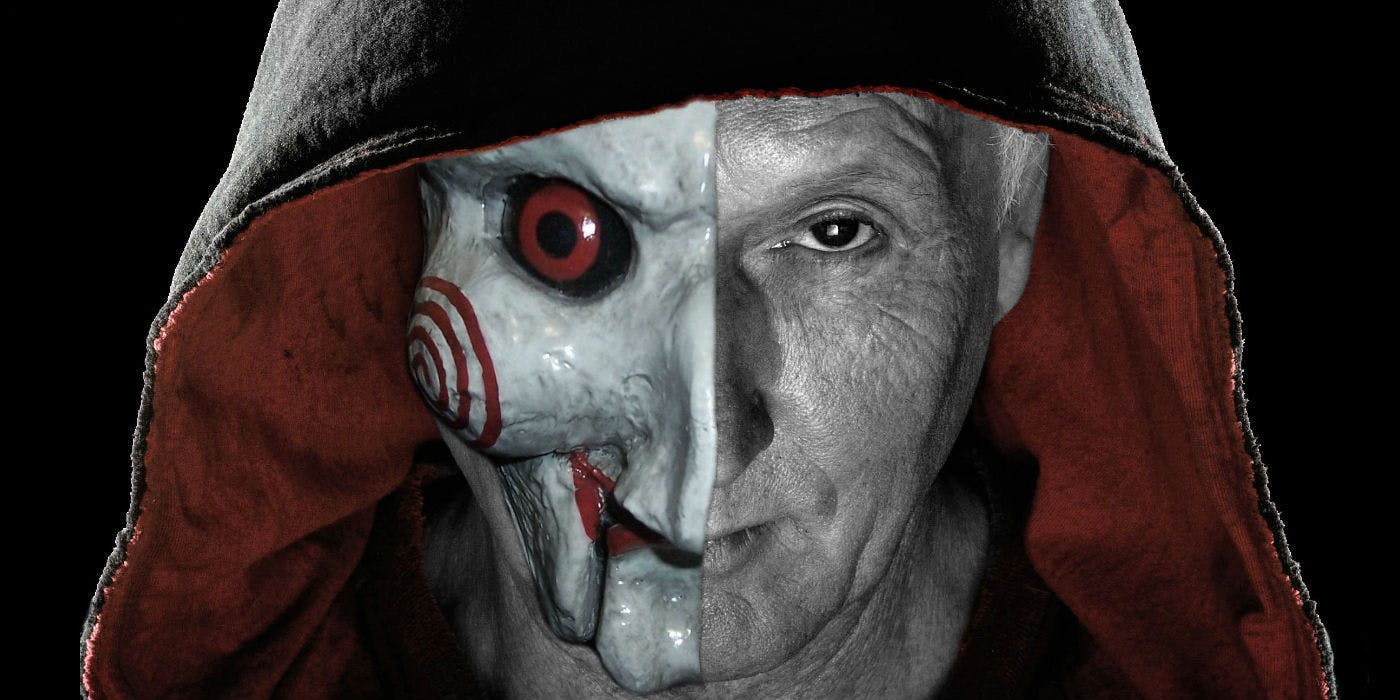 The first decade of the 2000s was a pretty messed up time for horror movies and nowhere was this more evident than in the increasingly insane Saw movie franchise.

From 2004 to 2010, fans were treated to a whopping seven Saw movies, each grimmer and more inventively gory than the last.

Coming off like a f*cked up adult version of Home Alone, the films focused on the exploits of serial killer and weird, gross, freaky puzzle fan John Kramer.

When Kramer is diagnosed with an inoperable brain tumour, he responds in the only logical way: by creating a series of elaborate trap puzzles designed to kill and maim good looking American folk, guilty of some sin or another.

It was kind of like Se7en, if the killer turned out to be an old man version of Macaulay Culkin’s Kevin McCallister, rather than Kevin Spacey’s John Doe.

Eventually – SPOILER ALERT – Kramer was killed off and another generic looking guy took his place as the franchise’s central villain. It’s not like anyone cared at that point though – they were more focused on the increasingly insane traps that featured in the movies.

Now that a new Saw film recently came out to try and reboot the franchise – the imaginatively titled Jigsaw –  it’s time to look back at 11 of the most fucked up traps from the franchise to date.

This trap may not have ended in gruesome death for the poor sod involved but audiences still had to watch a grown man pull his own wisdom teeth out with a pair of pliers to obtain a security door combination. He saved some money on any costly dental work at least.

In the future this is what The Apprentice might well look like: two business wankers tasked with “donating” as much of their flesh and body to a set of scales as they possibly can. The loser is whoever provides the least amount to the scales. The loser also dies.

There’s really no point in trying to explain this particular trap; it makes no sense. One guy is told to get in a coffin full of glass. He refuses to. The coffin then closes with someone else inside it and he’s left in the room, where he ends up getting squished to death. It’s daft.

A contender for the world’s shittest maze, this one puts a some poor, fat, naked dude in the centre of a cage full of razor wire and with the only door in and out set to lock shut in just a couple of hours. In order to escape, he has to seriously fuck himself up. Christ.

The stuff of genuine nightmares. A dude wakes up wearing some fucking crazy bear trap mask thing that is going to close at any minute and crush his whole head to shit. He’s got the key though. There’s just one problem: it’s buried behind his eyeball.

Never let it be said that Jigsaw isn’t creative. For this particular trap, some dumbass judge guy finds himself chained to the bottom of an empty vat that is slowing filling with the minced up carcasses of dead rotten pigs. It’s gross, takes a while and will haunt your dreams.

An absolute classic and arguably the one trap fans always remember from the second movie. What better punishment for a recovering junkie than to be thrown into a pit of used needles. “It’ll be like finding a needle in a haystack,” Kramer says. Heh, good one.

The sheer effort and mechanics involved in the construction of some of these traps is astonishing. Where did the killer find the time to make this shit? Basically, some dude has to lift some heavy bars or a woman will get a series of spikes through her eyes and mouth. Unfortunately, he’s skipped arm day and is also getting stabbed at the same time. Bummer.

Alright so the whole ‘saw through your foot or face death’ thing may have been stolen from the first Mad Max movie, but the sight of respected actor Cary Elwes actually going through with the deed is still seriously messed up and part of why the franchise has remains so enduringly popular.

Another insanely elaborate trap that ends in the kind of horrific death that will haunt your dreams and leave you wondering why you went to watch Saw VI at the cinema in the first place. Some douche we’ve been following the whole movie gets injected with a ton of needles containing acid in his torso. His bottom half pretty much melts away. It’ll put you off lasagne for life. And Saw movies for that matter.

If you didn’t catch the new Jigsaw yet, check out the trailer for it right here. Bound to do the series justice.