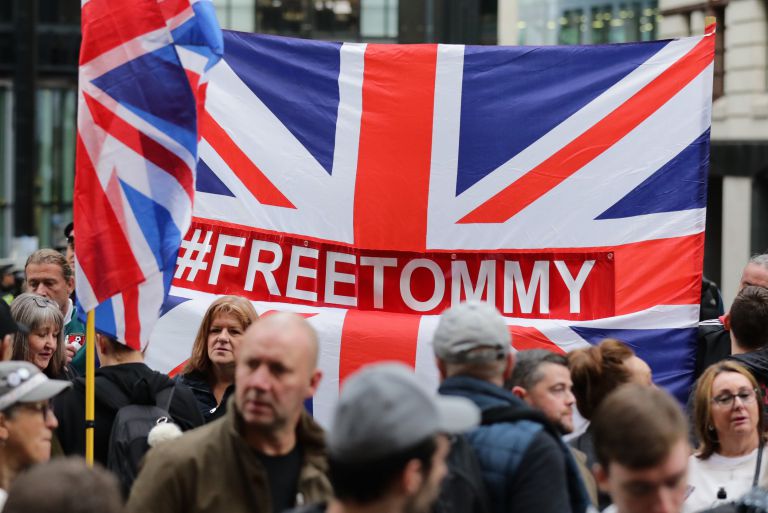 He’s out on bail until his case can be referred to the Attorney General.

There aren’t too many figures as polarising as EDL founder Tommy Robinson, but his popularity amongst some people in this country was demonstrated today as supporters gathered around the Old Bailey to find out what was going to go down in his court hearing.

There was the very real possibility that Robinson could be sent back to jail for his alleged crime of being in contempt of court, but Judge Nicholas Hilliard QC instead referred the case to the Attorney General, giving the following explanation:

I think it necessary to look at quite a lot of the detail of what Mr Yaxley-Lennon said in the broadcast as to come to the overall picture as to what happened.

I’m satisfied in the light of the issues as they now appear as they emerged from the statement of yesterday, that cross-examination of Mr Yaxley-Lennon is necessary for a proper and thorough examination and resolution of the case that is in the public interest.

Stephen Yaxley-Lennon is Robinson’s real name in case you didn’t know. Anyway, this meant that Robinson (or Yaxley-Lennon, whatever) was released on bail and he walked out triumphantly onto the steps of the Old Bailey, where all his drunk supporters started singing a song about how the government ruled us to the tune of ‘Hallelujah’ that was entitled ‘How They Rule Ya’. Robinson then delivered a speech and they all chanted about how they loved Trump as well.

You can check all the footage of that below as well as the lyrics to ‘How They Rule Ya’ (sorry about the ads):

This is what is being sung outside the Old Bailey in support of Tommy Robinson…. people genuinely, whole heartedly believe this stuff. We’re getting something really wrong. pic.twitter.com/JH87yB7MSE

I mean yesterday I was talking about how it was cool how hardly anybody showed up to an EDL march in Manchester over the weekend, but I guess when stuff like this happens the day after then you can’t really get stoked on that. I can’t actually believe people think that these sentiments are actually true and that it’s worth heading down to the Old Bailey to stand around drinking cans of Stella and Strongbow on a Tuesday morning, but here they are and they’re doing those things and it’s kinda distressing to be honest.

I would hate to have seen what would have happened/will happen if Tommy Robinson is found guilty and sent back to prison. It’s a scary thought.

For more of the same, check out the letter Tommy wrote in prison last time. Bit soft.