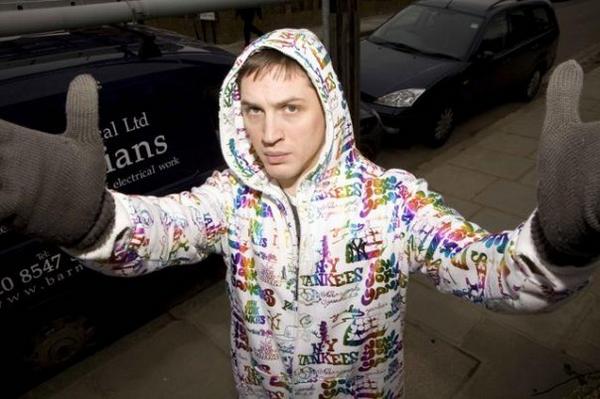 Tom Hardy is well known to us as one of the best actors in the business these days, but surprisingly acting wasn’t his first vocation of choice and he was actually a pretty decent rapper back in the day.

A mixtape that he made back in the 90s alongside DJ Eddie Too Tall has emerged today thanks to Reddit. Hardy goes by the name of Tommy No1 and is actually surprisingly decent spitting out Cockney bars about growing up in the 90s. The beats are good too, with a kind of jazz vibe to it thanks to some heavy drum samples.

Nice right? Hardy had this to say about the mixtape:

I started out rapping when I was 14 or 15. Because I come from a nice middle-class neighbourhood it was a very hard sell. And I wasn’t very good!

I used to be with the guy who managed Leela James and Lauren Hill, Pras, the Fugees and all that. I worked out with [Grammy winning producers] Warren Riker and Gordon Williams.

I’ve recorded loads of stuff but it’s never been released.

To be honest I reckon he should just do a Jared Leto and take a bit of time out from acting to focus on his music career – who knows what might happen? He’s definitely got the profile to make a successful album now, even if it turns out to not be that good.

Judging on this though it’s probably going to be worth the effort listening to. Go for it Tom.

For more old Tom Hardy stuff, check out his MySpace profile from the 1990s. Cringe.