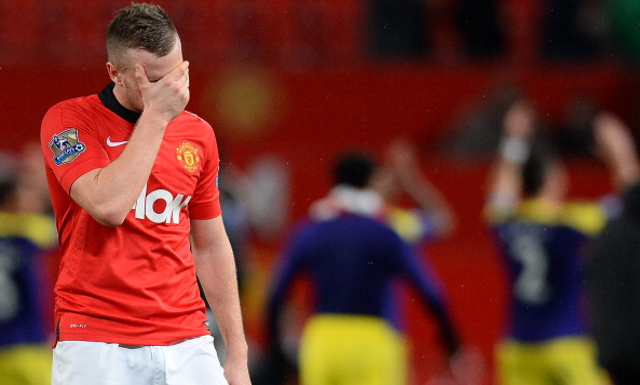 Turn down Cesc Fabreas and sign Tom Cleverley instead? Surely not…

Imagine your manager has first dibs on Cesc Fabregas and for some bat shit insane reason decides not to sign him, but then turns around and signs Tom Cleverley instead. You’d be pretty fucking pissed off right?

That nightmare situation could very well be reality for Arsenal fans if news that Wenger wants Cleverley turns out to be true. The rumours are already shitting up Gooners big time.

I swear to God of we sign Cleverley I’m so done with Wenger.

If Wenger signs Cleverley after passing on Cesc,I will personally walk to London and beat the crap out of him… – Another Goon (@antoswiftest) June 17, 2014

Please tell me the Vermaelen / Cleverley swap deal is all paper talk ? Surely we have enough toilet cleaners at The Emirates already. – ‘Big’ Steve (@AFCSteve) June 17, 2014

Just imagine. Fabregas at Chelsea and Cleverley at Arsenal.

If Arsenal swap Vermaelen for Tom Cleverley after turning down the chance to sign Fabregas then I’m leaving this planet. – Sam (@deathontwoIegs) June 17, 2014

Even Media Watch can’t bear to say we’ve been linked with Cleverley instead calling him “an English midfielder”. Bile inducing.

Cleverley would bring much needed scapegoating to the midfield for when Jack is out.

Apparently, Wenger made an agreement with Mourinho, that if he let him have Fabregas, Mou wouldn’t also move for Cleverley. He’s ours! #AFC – i.am.worldcupâ„¢ (@AsTallAsHerEyes) June 17, 2014

If the unfathomable happens and we end up with Cleverley we should all talk him up as new Pirlo to impersonate Manure fans a few years ago.

If Wenger actually buys Cleverley off us then he deserves a statue.