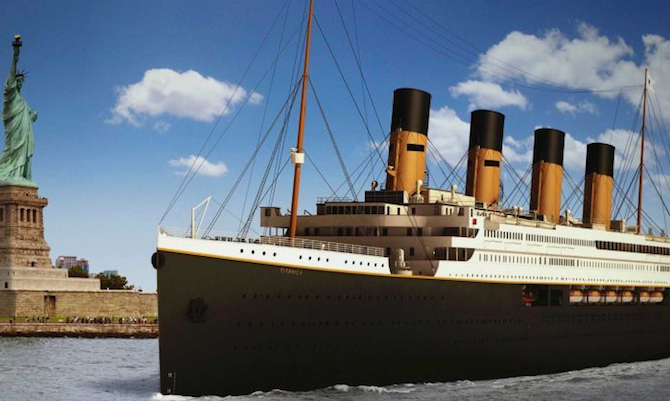 Almost 100 years after the original Titanic sank, an Australian billionaire has revealed plans to build an exact replica called Titanic II and sail it from Southampton to New York. But will it meet the same fate? And a better question, why the hell is he even bothering to do this?

As far as dumb ideas go, this has to be one of the dumbest and vainest ideas in the history of ideas. We actually covered this about a year ago here but it seems like things are starting to speed up with it now finally and it might actually happen, despite it being completely stupid. Basically this Australian billionaire called Clive Palmer realised nobody in the world actually knew who he was despite the fact he was a billionaire and decided he had to perform some kind of dumb stunt to get the world to notice him and so decided that the way to do this would be building a replica of the Titanic – aptly named the Titanic II – and have it embark on the orignal’s maiden voyage from Southampton to New York. Better make sure you watch out for icebergs on that route pal.

Anyway, this may seem like a big joke and to most people it probably is but Clive Palmer is a billionaire so he can pretty much do whatever he wants, even if it is a big joke and/or pretty crazy. Palmer unveiled plans for the vessel at the Intrepid Air, Space and Science Museum over in New York yesterday and announced that construction is scheduled to take place in China soon. He then completed his press conference by throwing out a load of useless quotes that don’t really mean anything: ‘”We all live on this planet, we all breathe the same air and, of course, the Titanic is about the things we’ve got in common,” he said. “It links three continents.” Right, that definitely makes a lot of sense and inspires me that Titanic II is going to be a success.

Palmer also stated that there was less chance that his vessel would hit an iceberg. Not due to better technology or more vigilant employees, no no no. It was down to global warming and climate change and the fact that there are a lot less icebergs in the North Atlantic now than there were back in 1912. Great news. I’m glad that global warming and climate change and everything that we’re doing to destroy the environment means that it’s more likely that a replica of the Titanic will be able to complete its maiden voyage. In fact I’m super stoked. I knew there was a reason we were creating a hole in the ozone layer or whatever.

It won’t be an exact replica of the Titanic though. Although it’s based upon the design it will also feature a few upgrades, like air conditioning and a helipad, and will also be in line with modern cruise ship technology. Crucially it will also have enough lifeboats and life rafts to ensure a place for everyone on board this time, which was probably the key error in the original’s spec. It will be powered by diesel and not coal, but Palmer has said that there will be no television or internet on board to give it a more authentic experience. You will also be able to dress up in Victorian themed costumes that will come with the boat to fully recreate the feeling of the original voyage. Just gotta hope it doesn’t FULLY recreate the experience of the original voyage so you don’t end up with the boat sinking all over the place.

Fortunately it looks like that won’t be the case. As well as there being less icebergs around to act as obstacles, some Finnish guy called Markku Kanerva – who is the sales manager at Deltamarin, the Finnish design company involved in making the blueprints for Titanic II – stated that ‘it would be the safest cruise ship in the world.’ Hmm, where have I heard a line like that before? Palmer was a little more cagey with his words though, saying he refused to describe the ship as unsinkable because “Anything will sink if you put a hole in it. I think it would be very cavalier to say it. I think people in the past have done that and lived to regret it,” which I guess is kinda smart or is just him covering his own ass. Either way it’s excellent knowledge of history.

â˜› Not Your Kind Of Cruise? Check This Out: Heavy Metal Cruise Ship 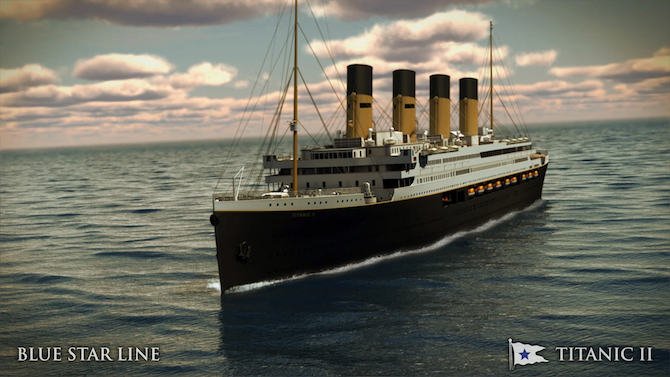 But seriously, the whole venture seems pretty stupid to me. I mean everyone knows about the Titanic – even before the blockbuster movie came out it was just one of those stories that everybody knew because it was so mind numbingly stupid that anything like that could ever have happened – so what the hell is the point of building a Titanic II? To prove that if the people who had run the original Titanic had actually bothered to watch out for giant icebergs that it might not have sunk on its maiden voyage? I think most people can probably guess that it probably would have if people hadn’t been so up themselves back at the turn of the 20th century and too busy perving on Jack and Rose to watch out for icebergs, so this is really an exercise in futility, other than it’s great press for this Clive Palmer guy. Unless it actually does sink on its first voyage, in which case he’s going to look like an idiot.

After it gets past that hurdle though it’s likely that this will be a pretty awesome tourist attraction that people will probably love for years to come. Until it inevitably sinks or crashes. There is just no way that isn’t going to happen at some point, I mean just look at Concorde. Stuff like that always happens. Hopefully it won’t happen on its maiden voyage but you know if it did I’m sure the irony wouldn’t be lost on most of East London. Palmer is claiming that 40,000 people have expressed an interest in tickets for the maiden voyage which is due to occur in 2016 sometime. Wow. Rather them than me huh, don’t people know that history tends to have a way of repeating itself?

â˜› Watch This Next: Watch A Van Give Birth To A Boat