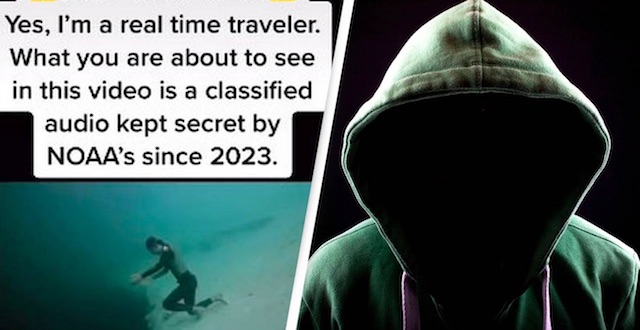 Don’t go into the water.

I think I’ve always said to anyone who listens to me that all of the creatures that exist at the bottom of the ocean that we know about are way more terrifying than anything that may or may not exist out there in the cosmos and now thankfully a time traveller from the year 2582 has validated what I’ve been saying.

This time traveller from the year 2582 seems to be getting a lot of traction on his TikTok profile at the moment with his revelations about the future and this one warning us about the dangers that lie beneath the ocean has gone especially viral because of its controversial subject matter. Take a look at it below and see what you think:

Wow. Truly terrifying stuff that I suppose implies the existence of some scary creatures living down there near the Earth’s core. Very scary.

Of course, it’s very easy to pick holes with this stupid time traveller’s stories because he could literally just make them up as there’s no evidence that any of them are true whatsoever. The video footage used in that clip is of someone free diving in a completely different hole and it’s been around for years. I kinda like the way he put ‘anormal’ in inverted commas because it implies that he hasn’t just spelled abnormal wrong but ‘anormal’ is a new word from the future that has been invented to describe this hole. Nice try there time traveller, but you’re not fooling me.

Although I still stand by the idea that the bottom of the ocean is a completely terrifying place. Just take a look at some of these freaks for example.