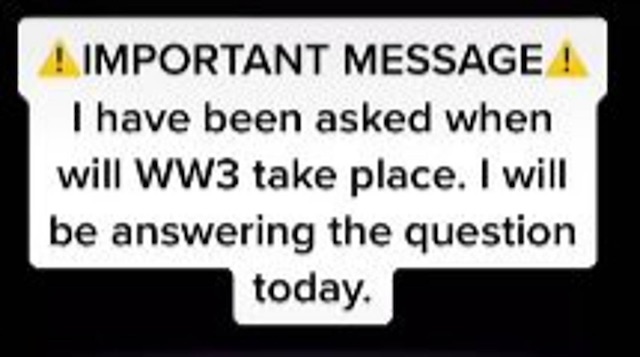 Thanks for coming back to tell us dude.

A couple of years ago these videos of time travellers explaining what the future was like were all the rage, but they kinda disappeared and only now seem to be making a bit of a comeback in the last few weeks thanks to the advent of TikTok.

This latest one comes from a time traveller called ‘timetraveller2582’ – at least he isn’t leaving anything to the imagination there hey? – who has revealed that he knows when World War Three will start and everything that happens in the run up to it. Take a look at his TikTok and see what you think:

I have been asked when will WW3 take place. I will be answering the question today.

Unlike the two previous World Wars, WW3 wasn’t a ‘total war’ but rather a precision war.

WW3 will start in 2048 but the world war is generally said to have begun on Thanksgiving day, 2051.
The cause of this war will be with the attack on the US orbital defense network and subsequent declarations of war.

On Turkey by Poland and India as well as declarations of war on Japan by the USA and Korea.

So there you have it – we’ve got 30 years left until we have to start worrying about World War Three and whatever that means for our livelihood and the state of the Earth. Not really sure what the situation’s going to be during that period because conveniently timetraveler2582 hasn’t bothered to tell us yet, but given how crappy the last couple of world wars were you probably wanna make sure you have everything sorted out in your life before they start, preferably with a bunker with a five year food supply somewhere out in the wild. Thankfully you’ve got a bit of time to start planning that now thanks to this guy’s generous reveals. Awesome.

If you’re convinced by him then I would suggest giving him a follow as well as there’s a lot of similar information on his account as well. You know, stuff about alien invasions, human and robot wars and GTA 6’s release date. All the important facts you need to know.

For more of the same, check out when a time traveler from 2030 met himself 40 years in the future. What a headfuck.