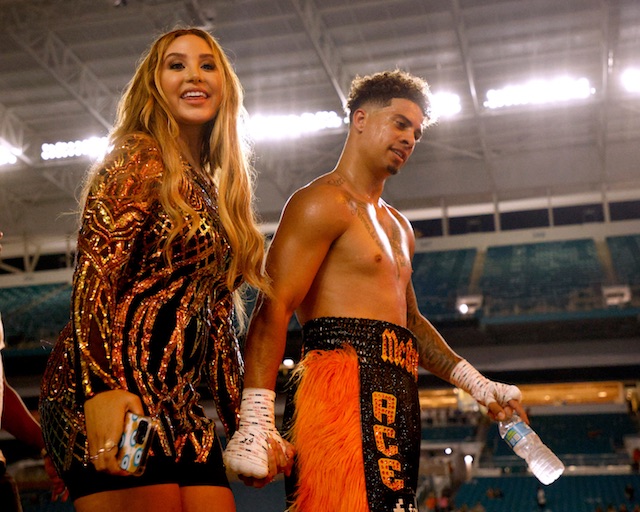 I’ll be the first to admit that I have no idea who Austin McBroom is, but the fact that he might have been cheating on his wife and that their whole relationship might also be completely and utterly fake has definitely got me interested in them.

McBroom was making his boxing debut on Saturday night at the Social Gloves: Battle of the Platforms event on Saturday night where he managed to knock out TikToker Bryce Hall but he had to deal with the fallout from a TikToker named Monica Bush/MoniManey earlier on in the day. Bush had uploaded several videos to the platform where she claims that she had an affair with McBroom and that he told her that his marriage to his wife Catherine was a sham and purely for promotional reasons.

She’s also got a bunch of text messages from him as supposed proof of their affair. Spicy:

The TikToker alleges that after Austin McBroom allegedly took her to a home in Malibu, they ran into fans who took pictures of them in Austin’s car. pic.twitter.com/CHNjBsluiy

The TikToker shared screenshots of alleged texts and DMs between themselves and Austin McBroom. pic.twitter.com/GWq8TmGWYO

Yeah kinda seems like he hasn’t got a leg to stand on with some of the stuff she’s saying there and those text messages, but is it really going to be that big a deal for him? People lap his content anyway so if it’s revealed that he’s splitting up with his wife then he’s probably only going to get more views because that’s the kind of drama that people want to see, isn’t it? Pretty much a win win situation for the guy. I mean even I’m talking about him now, right?

For more of the same, check out when McBroom got into a massive brawl in the build up to his boxing match. Pretty dramatic stuff tbh.