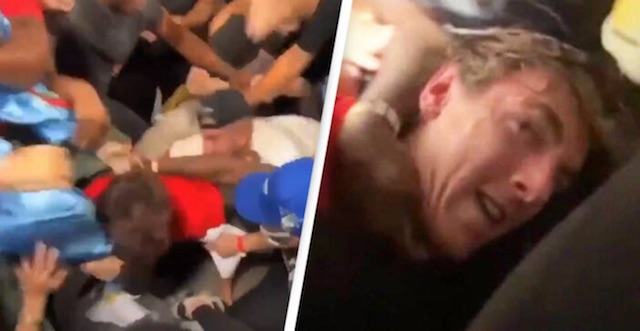 These guys are really passionate.

If there’s anything that screams Generation Z in 2021, then it’s a humongous brawl breaking out between TikTokers and YouTubers at a conference for the two social media behemoths and that is exactly what we’re seeing in the footage below.

Apparently there’s an event on June 12th where 12 of YouTube and TikTok’s top content creators are going to be boxing each other, but things spilled over in the press conference for the event over in Miami yesterday with ‘Sway House’ star Bryce Hall and his upcoming opponent ‘The ACE Family’ YouTuber, Austin McBroom really getting into it. McBroom was just sitting in his chair answering a question when Hall ran at him and pushed him off it before the whole room jumped in and tried to separate them and everything went kinda crazy:

Bryce Hall & Austin McBroom get into a fight during the YouTubers vs. TikTokers press conference, causes a whole scene pic.twitter.com/mhH0cNLWea

Meh. That started off kinda good but then you couldn’t really see anything that was happening and the commentators were going way too crazy for what was actually going down, especially the guy that said ‘I can’t wait until June 12th!’ over and over again. Can’t believe that anyone is actually excited for this bullshit, but given the millions of views that all of these people have on their respective social media platforms, it’s probably going to be the biggest boxing PPV of all time.

Talking of that, the fact that these guys are all social media influencers means that this little ruckus was almost certainly pre planned as they know how to generate hits and views and this is exactly how to do it. It’s literally their job. Austin McBroom tried to deny this though, I’m not sure if I’m believing him though:

He out here trying to wrestle. We got a fight June 12 – he’s wrestling me!

If he does that bulls*** on June 12, he’s getting his ass knocked out. That’s what’s happening.

Guess it’s real and Austin McBroom is on the warpath. I won’t be tuning in but I can’t wait for the memes afterwards. Go McBroom?

For more of the same, check out this massive fight at Luton airport that left three people injured and 17 arrested. Ouch.